How to Play the Acoustic Guitar and Chord Progressions

here’s a few simple ideas I came up
with today on my acoustic. I’m inspired to
play more acoustic from Jimmy’s new course: 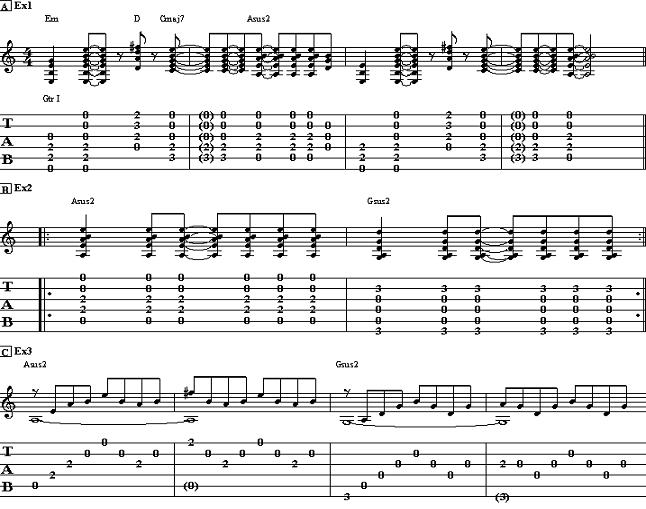 Hey, guys. Claude Johnson here from guitarcontrol.com and
I’m happy because it’s Friday today and I’m excited because
I just put new strings on my acoustic. Kind of getting
inspired for Jimmy Dillon’s new course, Modern Acoustic Guitar.
If you already ordered this course, I appreciate your business
and your DVDs are on the way. And if you haven’t checked it out
yet, just go to www.modernacousticguitar.com. It’s really
awesome so go check it out.

I just wanted to pull out the acoustic and see what I could
come up with today. I came up with a couple cool things.
So let me show them to you. First is a little chord
progression that I sort of borrowed from an Incubus
song, but I changed around the rhythm a little bit.

It goes like this: E minor; D; C major 7 to A sus.
So just a standard E minor chord, D as like a little
passing chord and then C major 7, which is like a
C but you lift-off your 1st finger, so you just have
your ring finger on the 3rd fret A string, middle
finger on the 2nd fret D string. And then A sus, which
is a great chord. If you’re bored with your A major/A
minor, try throwing in A sus, a very nice, open sound.

So this is an interesting G chord. It’s like a G — sort
of like a G sus, too, almost. So it’s like an A sus to a
G sus. This voicing of the G, I’m just putting my middle
finger on the 3rd fret low E string, on the G, then I’m
playing the next three strings open and then I’ve got my
ring finger on the D note, which is on the 3rd fret of
the B string. So it’s unusual because you have both a
low G and the A ringing open.

Finally, here’s a little picking pattern that you can
do on that A chord. So I’m basically going right up the
chord and then back down, and then I go back up to the
B string. Then I repeat the last four notes, but I’m
going to put my pinkie on the F sharp note, 2nd fret,
high E string. F sharp back to the open E.
So the whole thing…

And then on the G chord, pretty similar pattern. But
then I do this. So I just — that’s your variation
there with the A note on the 2nd fret. So check the
tabs. I’ll give you that pattern.

Possibilities are endless. I encourage you to breakout that
old acoustic guitar if you’ve only been jamming electric
for a little while, like me. And of course, once again, check
out www.modernacousticguitar.com because Jimmy Dillon
is really the pro at acoustic guitar and giving us some
awesome riffs to expand our horizons.

All right, so have a great weekend and I’ll catch
you on the flip side.