II V I Jazz Guitar Variations | Easy Ways to Do It

In this guitar lesson, I will teach you some cool
variations for the V chord. Ofcourse, I´m talking about the
II V I jazz chord progression.
Hope you like it!!! 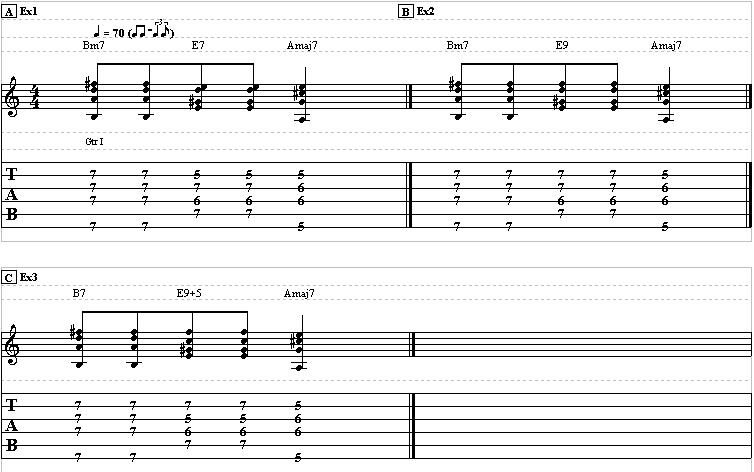 Hey, guys. Claude Johnson from guitarcontrol.com
back with another mini lesson. I’m going to try
to make this real quick, but I want to show you
two cool variations on the II V I.]

If you’re not familiar with II V I, it would go
something like this. That happens to be
in the key of A. I’m playing B minor 7, which
is the II; E7, which is the V; and A major 7,
which is the I.

So the fingerings are, I’m just barring across
the G, D and B strings and grabbing the low E
string with my thumb and muting the A string.
A very cool chord. You can just grab any fret.
The E7 is the V chord. I’ve got my ring finger
on the 7th fret A string; middle finger on the
6th fret D string; pinkie on the 7th fret G
string and first finger on the 5th fret B string.

Also notice this little shape on just the first
three strings of the chord. That’s just a great
three-note 7th chord with no 5th. It’s very
common in blues. There’s no 5th in this chord.
Or we do the octave. Then the major 7th, a lot
of jazz guys wouldn’t use their thumb, but I’m
just going to play it my own style. I use the
thumb to get the low E string 5th fret, and then
I’ve got my middle finger on the 6th fret D string,
ring finger on the 6th fret G string and first
finger on the 5th fret E string.

A lot of guys know the basic II V I; maybe you
even know the 9 chord. Here’s a little something
different. It’s an E9 sharp 5. A very cool sound.
This chord is basically root, 3rd, sharp 5 and 9.
We leave-out the 7th. It’s a nice, tight voicing.
It just gives you some options, some ideas,
some colors to play with.

I hope that was useful and if you want to learn
more about jazz and jazz guitars, go to
guitarcontrol.com/jazz. We have an awesome
chorus from Instructor Claymore and you’re
going to learn a lot of cool stuff. So go
check that out, guitarcontrol.com/jazz and
I’ll catch you next time.