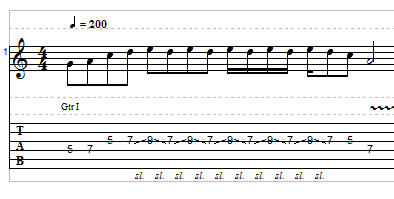 Hey, guys. Claude Johnson here from guitarcontrol.com and today I just want to show you this little sliding thing. I call it the modern slide vibrato. I’ve seen a lot of guys use this technique, modern fusion guys, in recent years have use this and it’s like you get that vibrato effect because you’re going between two notes. But instead of like shaking the note, you know, you’re sliding on one string quickly. So I’ll give you this example. Here’s a lick that you can try. It’s an A pentatonic, 5th fret on the D string and you walk up four notes in the pentatonic. So 5th fret, 7th fret and then go to the G string, 5th fret, 7th fret. So the first four notes… And then you’re going to slide up to the 9th fret. This should be with your ring finger. And you’re going to slide back and forth from the 7th to 9th. So one way that I think this is really good, you’re not just sliding anywhere. The best thing that really works well that I’ve seen is between two notes that are like a full step apart or two frets apart. So that’s why we’re sliding from the 7th to the 9th. Another trick to make this work is you start-off just like with not extremely fast, just in rhythm with your lick and then you try to double-time it. So just play this first. And then after that you’ll keep sliding back and forth, but try to go twice as fast. I need to practice a little bit more myself, but it’s a cool technique. So try it and I hope you have fun with it. I will catch you next time. Rock on.

How To Do Slide Guitar Lick in A7 – Blues Guitar Lesson

How to Play E7 Blues Guitar Lick With Slide Technique

How to Play Call Me the Breeze by Lynyrd Skynyrd