Call Me The Breeze Guitar Lesson

In my Guitar Control Call Me the Breeze guitar lesson we are going to focus on the intro. This song is so fun and will be a little challenging. Though you probably have heard Sweet Home Alabama a million times, it’s pretty cool to learn a lesser know Skynyrd hit that will push you a little. This intro is pretty quick and it’s very musical and very well written. We are going to break this intro down and break up into different phrases to make it easier to learn and then connect them all at the end.

Step 1: Phrase One and Two

We start off our Call Me The Breeze guitar lesson by sliding on the 4th string 7th fret all the way to the 11th fret. When we slide we actually put our finger down, pick the first note we want to hear and we push it to the second note we want to hear. But make sure you don’t lift your finger up, that’s how we keep the sustain, meaning we keep the note ringing out. So you pick and then push your finger over to the next note, again, not relieving the pressure from your finger since you first picked it. Then we are going to hammer on from the 9th fret to the 11th fret, both on the third string, using your pointer to your third finger. A hammer on is when you pick once, just like in the slide, but instead of pushing over to the next note you slap your finger down, and that’s how you get the next note to ring out without picking twice. So you hear two attacks but you only physically pick the first one with your picking hand. After all of that we are going to vibrato and hang out on the 10th fret 2nd string for one sixteenth note and an entire measure.

Phrase two stars with a full step bend on the 2nd string 12 fret. Then I pick the 12th fret 2nd string to the 10th fret 2nd string back to the 12th fret 2nd string. The full step bend we did was only up, not up and down. Also when bending be sure to use your first and second fingers for support on the bend and wrap your thumb around the neck. While your hand is wrapped around the neck and your fingers are bending the string, also push your thumb towards your other fingers to get a stronger bend. Check the video at 2:28 to see what I’m talking about. Also you can check what you bend should sound like by picking two frets up from the note you are bending to hear what your bend should sound like. If you are enjoying learning this intro be sure to check out my other lesson on how to play the intro to Strange Brew by Cream.

I hope you enjoyed our Call Me The Breeze guitar lesson. Remember to practice these licks slow first and then build them up to speed. That way you won’t miss any of the details that make this a stand out intro! And of course, as always, remember to have fun playing! That’s what it’s all about. 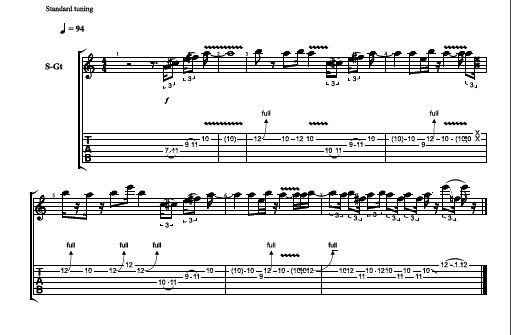