Some Of The Greatest Shred Players And Their Guitars

Most people who hear shred guitar players shredding their hearts out are in awe; the speed and precision needed to execute the notes and techniques correctly are beyond what most musicians are able to do without years and years of intensive practice. So for a tribute, we are giving you some of the greatest shred players of the day (in no particular order), along with the guitars they usually use to melt people’s faces with.

Dream Theater is known for their progressive feel. Their songs can be described as complicated with complex compositions with many layers, and they’re all highly-skilled and technical musicians. That’s why John Petrucci is listed here. His solos require mastery of many different techniques, and also speed. His guitar of choice is his signature model by Music Man, which allows him to truly shred.

No list of best shred guitar players would be complete without Yngwie Malmsteen who is pretty much known for being just that. To play like Yngwie, you would definitely need speed in both hands, but perhaps even more so in your picking hand. He usually picks all his notes, so there’s no shortcuts with legato techniques. And unlike other shred players, Yngwie’s first choice of guitar is his Fender Strat, which isn’t commonly used for shredding and isn’t as easy to shred on as other guitars.

Joe Satriani is known for his cool grooves, unique sound, and amazing shred guitar solos. He put a ton of work and time into developing his tone and signature Ibanez guitar line, and it really shows in his music. He’s also a highly technical player and a master of intricate effects, and watching him shred on stage is made even better when you notice how clean his playing is. He almost never misses a note or botches a line. 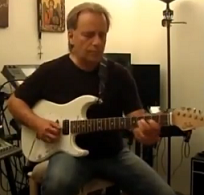 Alexi goes even beyond shred guitar players by also being the vocalist for his melodic death metal band, Children of Bodom. So not only is he crazy on guitar, but he’s crazy on the mic! One of Alexi’s main influences was also Yngwie Malmsteen, so if you like one of them, you’ll probably enjoy hearing the other. Alexi’s solos are highly melodic and extremely fast, so he’s a true shred master. He’s also recognizable from the ESP guitars he plays, one of which has sweet pink inlays.

So if you want to check out some serious shredding, definitely take a listen to these guitar masters. Each one has a different style, ranging from progressive, to classic, to bluesy, to heavy, so we’re sure there’s something here for any lover of shred guitar.