Hey, how’s it going this is Jon McLennan with Guitar Control, I hope you’re doing fantastic got an awesome song called “I’ve Got a Rock and Roll Heart” by Eric Clapton. I’m going to break it all down for you; I’m going to show you how to play the whole tune. 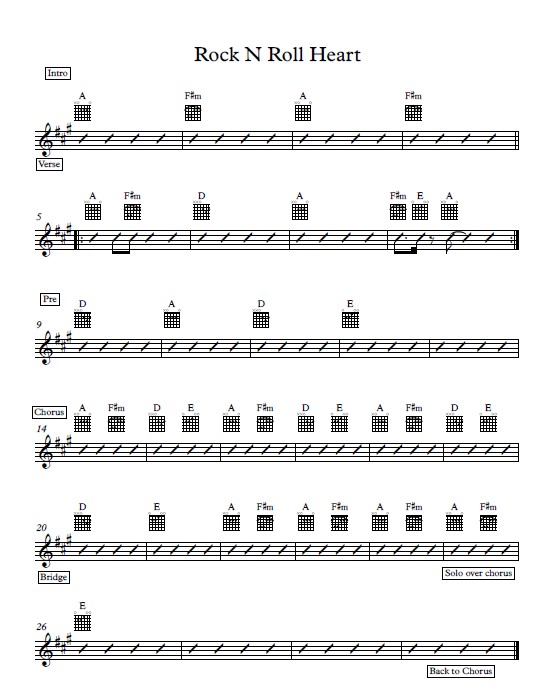 So that four-bar intro at the top of the tune alternates two chords an A and an F sharp minor, the way I play the A is I mute the 6th string then I play the 5th string open and I put my first finger down across three strings one and then I actually just mute the 1st string it’s kind of just a rock-and-roll way of playing an A. You’ll see I’m playing the A tune like some kind of Zeppelin, that’s the way I’ll play an A chord and then I go to an F sharp minor which these chords are very similar there’s only really one note difference in the Triad but you can see the commonality and then the chord right here became this.

So I’m going to play the 2nd fret on the 6th string 4th fret 4th fret 2nd fret is your minor chord again if you’re having trouble just click the link below you can get the chord diagrams. For this we have F minor back to A and I’m almost kind of feeling actually like a bo diddley kind of strumming pattern you know something that’s kind of says it and it’s you know for this tune one two three it’s kind of 16th note and a four E and it’s just kind of thinking that in the back of my head just my hands just kind of going back I’m pumping the chord a little bit to get that groove all right then we get into the verse and that sounds like this

That’s a little hit you know so what’s happening is on B one and playing F sharp minor one E and up on the 1st beat I’m playing at E and then the A is on the end of two. So those are little rhythms you want to try and nail with the band you know you don’t want to be like the one guy who’s not playing that rhythm look hope it’s going like we’re into the chorus so that 1, 2, 3, 4, it’s a 5 bar pre-chorus which is kind of cool it’s an irregular amount of bars which gives us gives us a little lift a little channel into the chorus so I’ve got D a de are those chords so d for one measure one two three four one measure D for one measure then E for two measures.

Then we’re into the chorus but we’ll get there in a second so let’s play the whole verse into the pre chorus and then we’ll stop on the a downbeat of the chorus here we go all right so you’ve got the intro and the verse down let’s move on to the chorus so that’s the chorus heading also into a little reentry and for that you’ll notice that I’ve kind of basically plotting out two beats on each chord one and you know in the verse we have like one we have that anticipation but now we’re going to put everything on the beat.

What I’m doing chord wise is I’m playing an A to an F sharp minor to a D, to an E, so one, two, and then just repeating that one to three times then I go for a D for one, I go to a D for one, measure and then I’m going to alternate this kind of a reintroduction just like our intro before they just reduce it by half you know 1, 2, 3, so it’s four bars of two beats each A F sharp minor, a F sharp minor and that’s where it’s kind of doing a little noodling you know doing more soloing which by the way the solo section is going to be over these chords for the chorus so let’s try the whole chorus together into that reentry.

Then we’re going to launch into a bridge that’s kind of the last section and really all it is 4 bars of E. Let’s talk a little bit about soloing, now as I had mentioned earlier the guitar solo basically the chords that are happening underneath is the chorus so you know you’ve got that you know that a f-sharp minor so I kind of automatically can group all these chords into being in the key of A and I know that just because I know a little bit of theory and I can group these chords and relate them to basically an A major scale and I’m going from one chord to the 6 to the 4 to the 5 at that point I can base it all off one kind of sound and what I would use and what Clapton uses a lot is the pentatonic scale and I’ll show you a great way of playing it up here. Put your pinky on the 12th fret and then you’ve got the 9th fret 11th fret 9th fret 11th fret 10th fret 12th fret 9, 12 so what that works out to be is this.

Now what I did is, I just put on a little looper pedal and I played that rhythm of these chords you’ll hear and then what I want you to try and do see if you can record yourself playing this rhythm and just see if you can app doodle through some of these notes you know really I’m trying to stay just in that position right now and to me that’s like Clapton’s coming out of that sort of BB King school so this is also something known as the BB box and where he would play you know this note is a so you basically find the root note on the second string and play licks like this kind of BB King style stuff

So that’s kind of my thought process and then you can work that aid pentatonic out of course in other places of the neck but maybe just start just so you can get used to that well you know one area and start with that and then slowly branch out you know the goal of course being the entire fret board.

I hope this lesson helps you out and inspires you to keep playing for more information you can click on the annotation on your screen or the iCard if you’re on mobile and you can check out one of the DVD courses online from guitar control. Make sure to subscribe on our You Tube Channel and we’ll see you in our next video lessons, thanks for watching.

How To Do This Easy Rhythmic G Minor Pentatonic Guitar Exercise

5 Basic Pentatonic Scale Patterns on Guitar You Need To Know

How to Get Faster on Guitar – Exercises for Building Speed

Video: Cool, simple fingerstyle tricks you use right away