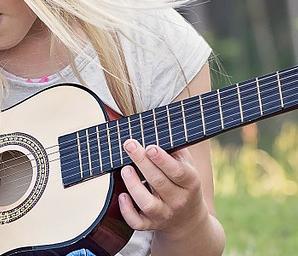 The following is a list of five songs that will each help you practice a different technique or skill that’s valuable for beginners.

“Roxanne” by The Police
By playing “Roxanne,” you’ll be able to practice the staccato technique, which can be described as a choppy way of playing. By not letting the notes ring out, and muting your strings as soon as you play them, you’ll hear the technique that’s often used in metal and reggae music.

Talking about classics, check out this CLASSIC GUITAR RIFF

“53rd and 3rd” by The Ramones
Many Ramones songs are only composed of a handful of chords, making them relatively easy to memorize. However, the difficult part is the speed at which they play everything, which, for beginners, can be hard to sustain for the entirety of the song. While “53rd and 3rd” is not their fastest song, it’s a good starting point to build up the strength and endurance of your strumming hand.

“Like a Stone” by Audioslave
Aside from the song’s bridge, “Like a Stone” will teach you patience and the ability to play to a slow tempo. For many beginners, it’s common to rush while playing, but that’s only going to hurt you in the long run if you can’t play at both slow and fast tempos. The bridge is also good for practicing playing using effects.

“Strange Times” by The Black Keys
“Strange Times” features a quick and catchy line that will help your fingers get more nimble. While also being fun to play, it will help you build speed in both hands and you’ll get to practice using the vibrato technique at the end of each line, where you hold down the note while bending the string back and forth to cause the note to “vibrate.” It makes a longer note more interesting and adds depth to your playing.

“Sex on Fire” by Kings of Leon
If you need to practice your bends, “Sex on Fire” is a great song for that. One of the most memorable parts of the song that distinguishes it from others is the bends in the chorus, which you’ll need to do with love. Because of the number of times you’ll need to bend throughout the song, it’s great for building up the muscles in your fingers.

By practicing these songs, and others like them, you’ll quickly build strength and speed. Hopefully you can also apply the new techniques and skills to your own playing, to add more variety to your music.

If you want to learn tons of songs on guitar, I recommend you to check out this course: