How To Play Someone You Loved By Lewis Capaldi

Check out this free lesson from Guitar Control instructor Darrin Goodman on how to play Someone You Loved By Lewis Capaldi. Be sure to get the free tabs that go along with this killer lesson. 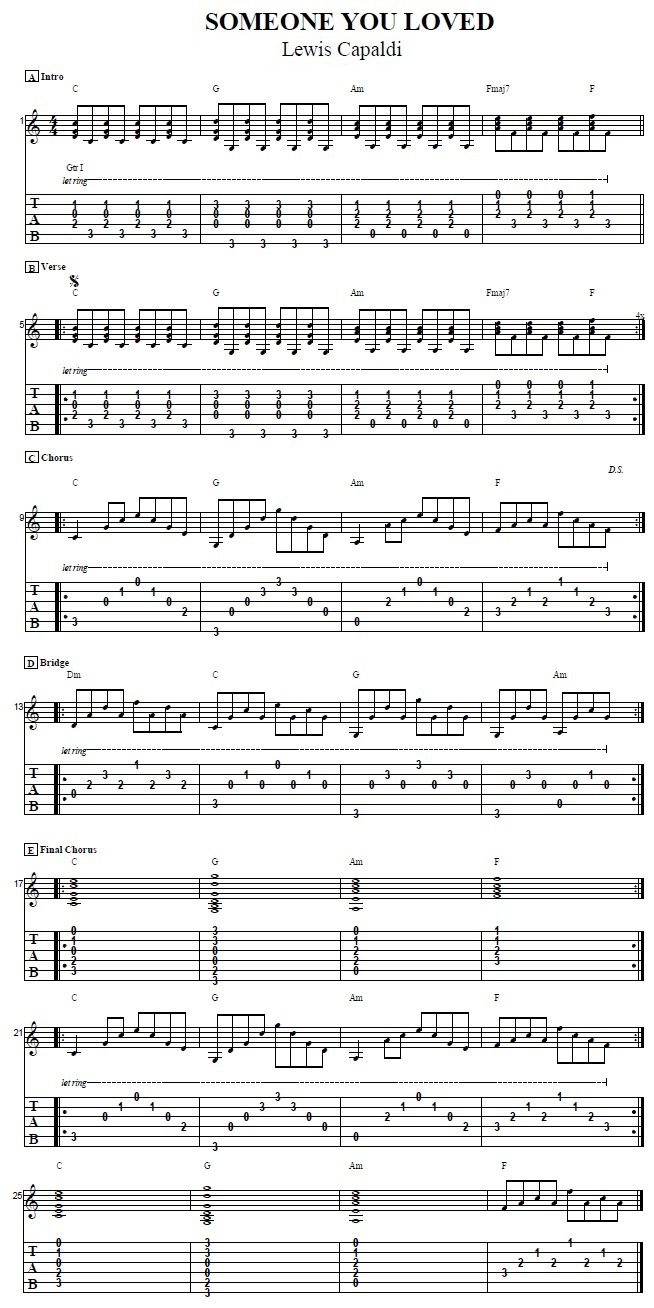 Hey everybody how’s it going? This is Darrin Goodman with GuitarControl.com bringing you this video lesson. Today I want to show you how to play this finger style song for beginners. It’s Someone You Loved by Luis Capaldi, I guess I’m saying that right.

Anyway this song is originally on piano, but I transposed it for guitar, it’s a great beginner song for getting into finger style playing. So be sure to click on the link in the description for the tabs and let’s get close up and take a look.

Someone You Loved Chords

All right so the intro and the verse are the same thing. So for the intro we just play through this progression once. You start with C and we have a full measure of C and we’re playing this as eighth notes.

So my first finger is going to be on the 4th string, my second finger on the 3rd and my third finger on the second string and then my thumb will be playing the bass note on the fifth string. So you’re going to pluck strings 2, 3 and 4 together and then follow that with your thumb on the bass note, so it’s all eighth notes; so it’s two, three and four and now if you are new to a finger style playing what I always recommend is that you just rest your elbow just on the back bout here on the guitar and that way you can just bring your arm down and have your arm completely straight, you don’t want it all bent up like this and when I pluck these strings you don’t want to pull away like this, you want this motion like you’re pulling a trigger, you want to curl your fingers in towards the palm of your hand and then follow that with the down stroke on your thumb.

So for the first measure; one, two, three, four and this is relatively quick… but we’re gonna play it slow and you should work on it slow and then get it down to where you make the changes in time and then just gradually increase your speed. So one measure of C then we switch to G, so we’re gonna keep our fingers on the same strings, but we’re gonna move our thumb from playing the bass note on the fifth string to the sixth string and we do a full measure of this the same way. And A minor; so now our thumb goes back, we’re still on the same strings with our fingers but we’re our thumb is gonna go back to the fifth string for our bass note and three and four.

Now it goes through that sequence like that for the intro and then when it goes to the verse it’s the same thing, but you do it four times. So after you do that one time through you just immediately start over again with the verse where the vocals come in four times. Now that leads us into the chorus.

Now for the chorus it’s the same chords in the same order, except the last major is just all F major no F major seven, but now we’re gonna change how we’re doing it a little bit. So now we’re gonna go just straight up finger-picking; so we’re playing bass note with our thumb on the fifth string and that’s a quarter note, so it’s like 1 and then we put our first finger on the 3rd string, 2nd on the second string and 3rd on the 1st string, so it’s 1, 2 & 3 & 4. And then for the end of 4; it’s the 4th string, so there’s a couple of ways you can do this, you could 1 2 & 3 & 4 & and then play that 4th string with your thumb, but I tend to just because I’m coming back down I just use my first finger to get that string again but, that’s just a personal preference, it’s just the way that I play.

Now we go to F and thumb is on the fourth string, first finger is on the third string, second finger is on the 2nd string and third finger is on the first string and now the picking patterns a little bit different. So calling off string names here we’re going 4, 3, 2, 3, one, two, three, four, one and two and three and four and, and that goes through twice, all right so that’s the chorus. Now at the end of the chorus you can see that it says at the top the musical direction for dal segno, if you don’t know musical direction that’s okay, we’re not going to get all into it right now but what that means is that you’re going to go back to the segno sign.

So if you look on your transcription you go back to the first verse at the very top of that there’s this kind of a fancy-looking S and that is the segno sign. So you’re going to play intro, verse, chorus, verse, chorus and then you move on. So the second time through you ignore that DS and then that leads us to the bridge.

Now we go to G again and our fingers stay on the same place and now our bass note is moving to the sixth string; so now we’re gonna go six three two three one three two three one and two and three and four and. And then on for the fourth measure we’re still on G for the first half of it we go 6 3 2 3 and then we switch back to A minor and we move our thumb from the 6th string to the 5th string and we go 5 3 2 3. So that last measure and then it just repeats and you go back and do the whole thing again. All right, so then that leads us into the final chorus.

All right, well I hope you enjoyed that and you got something out of it. Like I said this is aimed at you beginners, it’s just a good way to get work in that picking hand. Like I said it moves along fairly quickly. If you look the song up and listen to it and like I said it’s on the piano and it was transposed to guitar, but it’s in the same key, so if you’re in standard tuning you can play right along with it. Alright so if you liked the video give me a thumbs up and leave a comment down below if there’s something you’d like to see either myself or one of the other instructors at GuitarControl.com do in a future lesson. Anyway that’s all I got for you today, thanks for watching How To Play Someone You Loved By Lewis Capaldi and have a great day.

How to Play `Everybody Hurts´ by R.E.M the Easy Way

How To Play Jumpin’ Jack Flash by The Stones

How to Play Ain’t No Sunshine by Bill Withers

How to Play “More Than Words” by Extreme

How To Play Wheel In The Sky By Journey

How to Play Skinny Love by Birdy