How To Do The Palm Muting Exercise For Metal Rhythm Guitar

As much as it pains me to say, James Hetfield is probably the best metal rhythm guitarist of all-time, and if you’re in the mood for some four-on-the-floor, 8th-note triplet chugging, look no further than the first three or four Metallica records. 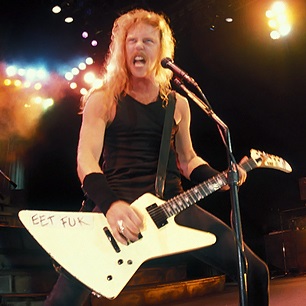 In my opinion, having slogged through a version of “Battery” or two in my lifetime, the key to metal rhythm guitar is in the palm of your picking hand. The one thing all metal jams have in common is palm muting.

Here’s a quick exercise: Pick up your guitar and form an E chord in the open position (as shown below).

Now, while striking only the top three strings of the chord, gently rest the flank of your palm against the strings as close to the bridge as possible – or wherever it’s most comfortable. Either way, give your undivided attention to your picking hand position. Continue to play the chord with heavy down strokes, emphasizing the percussive element of the instrument, while at the same time, varying the amount of palm pressure from your picking hand. Do this for approximately 5 minutes or so. Under no circumstances should you be afraid to experiment with picking and muting patterns. Try it with only the top two strings (E5). Get crazy with it. 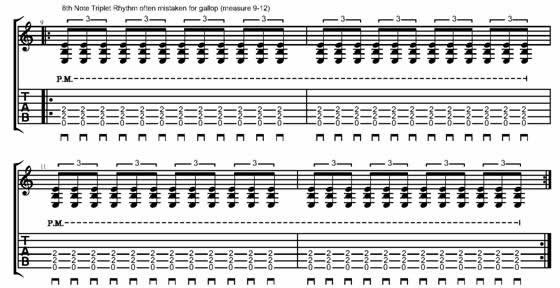 Congratulations! You’ve just played the overwhelming majority of every rhythm guitar part in every metal song ever written. Now play a D major chord (as shown below). Try the same exercise, this time on the bottom four strings. Eh, what the hell. Use the open A string, for an a fuller sound. See how that works? You can turn any chord into a metal riff simply by muting the strings and maintaining a solid down stroke. Don’t believe me? Put on any Pantera record and tell me I’m wrong.

Check out this VIDEO GUITAR LESSON ON A METALLICA´S RIFF

The infamous “metal chug” is not achieved by amplification – of course, that helps – but you can play metal rhythm on any guitar. Honestly, despite its relative complexity in terms of song arrangements and whatnot, metal rhythm guitar is probably the easiest type of guitar to play – and it’s so damn satisfying.

Once you’ve mastered the art of palm muting, you can move on to other metal skills, like sticking out your tongue and flashing the devil horns at the end of an epic guitar solo.

If learning songs on guitar is your goal, I recommend you to check out these courses:

How to Create An Effective Jazz Guitar Practice Routine

How To Tune In Drop D – Easy Metal Guitar Lesson

How to Play Fade To Black by Metallica