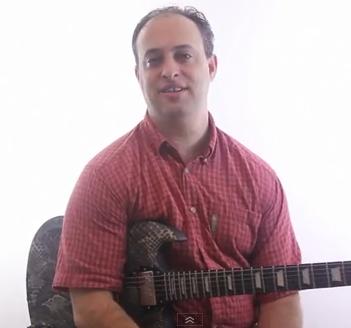 Here´s some cool tips about phrasing.

All About Phrasing – blues lead guitar

You might have heard that word, phrasing. What is phrasing
when it comes to lead guitar and blues guitar? Music is a
language so I’ll just use the analogy of the English language.
It’s not what you say, it’s how you say it, right? You might
have heard that expression before.

For example… Okay? That’s like our basic lick.
What I’m doing here is I’m in the key of B pentatonic.
I’m on the 9th fret, bending up, release, 7th fret
and then 9th fret on the D string. Let’s just take
each note and emphasize it rhythmically.

Now before I actually run through these examples I just
want to say about phrasing, just like in English, how
you say it. It’s everything you’re doing. It’s the timing;
it’s how loud or soft you’re doing it; whether you’re
adding vibrato; whether you’re sliding into a note; how
you’re hitting it with a pick; everything. It’s just
how you’re playing it.

If you’re learning this B pentatonic scale and you’re
learning to play blues licks, you don’t really have
to think about the phrasing. I would work more on
understanding the scale, playing melodies and how
you play it, all those little nuances, whether you’re
playing soft or loud. That’s just going to come in time,
naturally, as you express yourself.

Once in a while you can sit down and say, okay, I’m
really going to focus on… And play the same lick a
bunch of times. For the most part I don’t think that’s
very productive. If you are going to do that, record
yourself. Play a lick, hit the record button, go back,
listen to it and then you see it from the outside,
little things. Okay, my vibrato’s kind of not as smooth
as I thought it was or I need to work on when I slide
into a note, make it more smooth. My bends maybe are
not in pitch; I’ve got to make sure I’m bending correctly.
All those little things are stuff you can discover by
recording and listening to yourself. But for the most
part I wouldn’t worry too much about it. It’s just
something you need to be aware of. And as you become
a better musician with the fundamentals like learning
the fretboard, knowing the scale, knowing how to pick,
all that stuff, your phrasing it going to get better.
It doesn’t require you to spend that much time
specifically focusing on it. But it’s good to be
aware of. That’s my two cents on phrasing.

If you’d like to learn more about my lead guitar course
or my main guitar course called “Killer Guitar Control
Secrets” I invite you to check that out at
guitarcontrol.wpmudev.host/secrets. That’s all I’ve got
for you for now. We’ll catch you in another video
on another day in another time.