How to Do Guitar Chord Progression The Beatles Style

In this guitar lesson, Jon MacLennan will teach you a basic guitar chord progression

in the style of The Beatles. 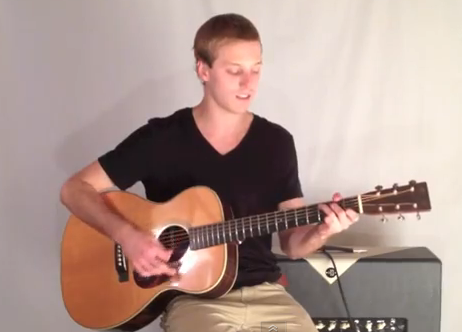 How’s it going everybody?
My name is John McClennan and I’m here
with guitarcontrol.com, bringing you this
lesson. Today we’re going to just look at
a simple strumming pattern, very much in
the style of the Beatles.

We’re going to take just a couple chords here.
We’re going to play a G, a D, an E minor and a C.
Be sure to click the link below for the tabs so
you can follow along. But here we go.

The thing that’s so cool about this and tons of Beatles,
especially acoustic guitar and strumming is they’ll take
something so simple. Like, if you just think about this
rhythm, one, two, three, four and you add one other strum
to it, you get the rhythm that we’re working on.

It just goes to show you that it doesn’t have to be fancy.
It can be simple and just work on your feel and getting
the chords clean and things like that.

Let’s take this now through the chords. Here we go.
One, two, three, four.

And then you’ll want to speed this up a little bit.
There’s an easy Beatles strumming pattern for you.

So once again, my name is John McClennan and we’ll
see you in the next video. Thank you so much.

Lessons on 6 Chord Progression on Guitar

How to Play Minor Modal Chord Progressions On Guitar

Learn How To Travis Pick With This Fleetwood Mac Riff

How to Sing From The Heart In 10 Easy Lessons

How to Play House of the Rising Sun On Guitar

How to Use Major Modal Chord Progressions