How to Play A Blues Guitar Lick Michael Bloomfield Style

Hey , check out this blues lick
in the style of Michael Bloomfield.
Not only is it a nice little spicy
blues lick, but what’s cool is that
we’re using major pentatonic
in the position of a minor pentatonic
box, so its very useful to creating
some killer leads.

If you want to learn a lot more
about it, check out Killer
Guitar Control Secrets

Anyway, today I want to give you a nice little lesson.
I’m going to show you a blues lick in the style of
Michael Bloomfield, one of the great, all-time great
blues guitarists. This is in the key of B. Let’s
check it out. Here’s the lick. Once again.

We’re in the key of B, up here on the 7th fret. And what
we’re going to do is start on the B string, we’re going
to go 7th fret, 9th fret and then up to the high E string.
So the first three notes — and I’m doing a hammer-on.
I’ll show you the picking in a second. So we do that,
than we bend. So we’re bending on the high E string
from the 9th fret up to the 11th, and back. Then we do
a little triplet. So it’s like a hammer-on, pull-off.
One, two, three, and then back down to the B string.
So far we have… It’s a nice little lick right there.

So with the picking, what I’m doing, downstroke,
hammer-on and then upstroke. Then downstroke,
upstroke and I do hammer-on, pull-off, downstroke.
Then I do — this is tricky, sort of — I do an
upstroke and then I’m just going to hammer-on on
this string out of nowhere, without picking it.
And then I do kind of like a sweep down, down.
That’s the trickiest part of the picking. You’ve
got to really get it clear. And one more downstroke.

It’s a nice little blues lick. What’s cool about it for
me is that you’re almost in the minor pentatonic position
but you’re actually playing in a major pentatonic. This
is a nice little fretboard visualization tidbit here.
When you have your minor pentatonic, you have on the top
two strings, three notes apart. If you just change those
to two notes apart, there’s your major. So what we can
do with this lick is start it off and go into something
minor right from that.

Play around, mix it up, but I’d definitely got
way deeper into major and minor in my course,
“Killer Guitar Control Secrets”. So check that
one out, folks. I think you’ll like it, at
guitarcontrol.com/secrets. So that’s about it.

Thanks for watching. Don’t forget to subscribe to the
YouTube channel and once again, if you’d like to check
out my course, “Killer Guitar Control Secrets”, just go
to guitarcontrol.com/secrets. All righty, catch you next time. 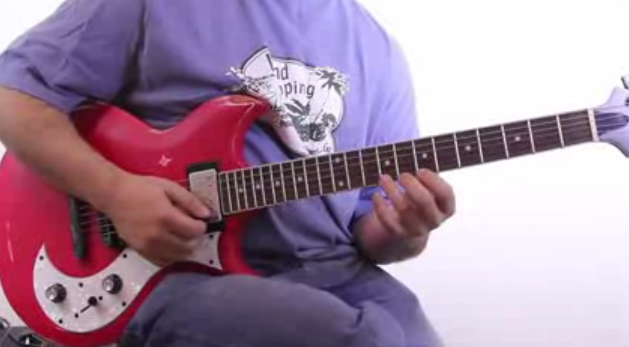