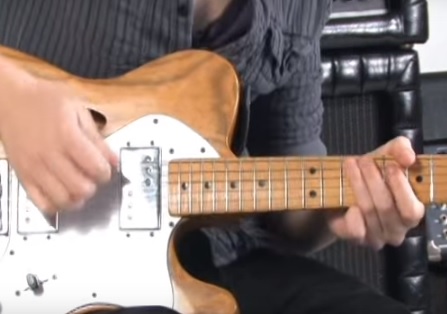 Here’s a sweet, classic blues lick technique – just one of hundreds of tricks that
Sol shares with you in “Blues Master Class”… Check it out! 🙂

That’s a great way to start a slow blues solo.

We’re adding-in a major 3rd, which means hammering from
the 8th fret onto the 9th fret. It helps to keep all
these top three strings fretted so they play out.

That gives you a major chord. If it was down here it
would be an open E. It’s a barred C, barre chord major.

That’s just the part of it we’re doing.

Let’s try this lick. If you leave the 7 underneath it,
which requires barring all four strings from top to
bottom E, B, G, D, you get that hammer-on with
the 2nd finger, it sounds pretty good.

How to Play “Tell me What´s the Reason” by T. Bone Walker On Blues Guitar

Some Great Guitar Tips To Become A Better Blues Player

How To Play Blues Guitar – Use Complete Guidebooks

How To Play Blues Intros in the Style of Eric Clapton

How to Play Acoustic Blues Shuffle Riff on Guitar

How To Play Blues Rhythm Patterns On Guitar