Useful Tips on How to Play A Guitar Chord Progression

Also: We’re holding a live interactive webinar this Thursday the 20th at 9 pm est.
Jon will reveal some killer guitar tips, some elements of his new system, and
you can ask him any guitar related question on your mind. It will be a blast!
https://guitarcontrol.com/maclennan/web1.php

Here and there you’ll see us take chords and add a note here
or add and take off a finger there and that’s going to show
you how you take the basic information that we have and
you kind of start tweaking it and you get different sounds.
So let’s jump into the first example here. This is going to
be in the style of the Beatles’ “Let it Be”. All of these
chords together make-up the chords within the key of C,
so all kinds of stuff going on right now.

You may have heard a musician or someone say this song
is in the key of D. This song is in the key of A. What that
is, is that’s like a home base, a root tonality that all the
chords move around. So here’s your C, D minor. And a great
way of telling what key a song is in is by looking at the
first and the last chord that you play in the song. It’s
not always the case, but generally it is.

You can also — they’ll place Roman numerals on each
one of these chords. So for instance, the first chord built
off the first scale degree is called the I chord and then
the II chord and then the III chord, IV, V, VI, VII, I. Okay?
You’re going to want to write this down. The I, the IV and
the V, in our case the C, the F and the G, are all major
chords. The II, the III and the VI are minor, and then VII
is the I diminished chord. But if you think I, IV, V, I mean,
there are a million songs that are just like… C, F, G, F.
I chord, IV chord, V chord, IV chord, I.

So the Roman numeral system is something that I will
be referencing as we work through the examples as far
as understanding breaking-down the specific chord
progressions so that you can familiarize yourself
with these songs and not just have to think of
every song.

Okay, here’s — I’ve got to memorize this chord to this chord
and look at this giant sheet music in front of me or something
you want to learn has all these chords and you’re thinking,
I just have to do this for every song? Well, what starts to
happen is you say, okay, I see all these chords are within
the key of C. And look, I keep coming back to C and I keep
doing this move. So you’re kind of saying, okay, here’s
this and here’s this and you’re putting it together.

And again, it starts to make more sense the more you
do it. So if we apply the Roman numeral system to our
chord progression it will help us sort of decode what’s
going on and understand how the chords work together
to create the song.

So let’s take a look at — the first chord here is a C. Remember
that I said a great way of knowing what key a song is in is by
looking at the first and the last chord. So here we’re in the
key of C. We’re starting on the C and we end on C. And when
we make the first chord movement, here’s our C, we go to G.
Now what you want to start to familiarize yourself with is
the relationship between those chords.

If we reference our C major scale, we’ve got C, D, E, F, G.
This happens to be the fifth scale degree in the key of C.
So we’re moving from the I chord up to the V. So you can sort
of start to connect the relationship of those chords together.

Next we go to A minor. Now this is just one step above your
G chord. So remember the G was the V. The next note is A.
So that’s going to make this chord the VI chord in the key
of C. So we’ve got I to the V, to the VI and then let’s find
the next chord, F. So we’re going to go back to our C scale.
C, D, E, F — did you catch what scale number that is? Here
it is: one, two, three, four. This is the IV chord. Again,
that’s all of the chords that we’ve used in this example.

So just to back up, we’ve got the I to the V to the VI to the IV.
And then it just goes I, V, IV and then to I. So this is a very
common sound where you hear the IV, the F, descending.
Or you might hear it walking up in some tunes. 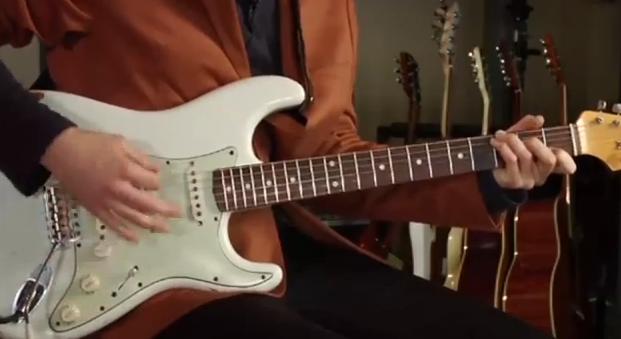