Hey guys. Check out this Guitar Lesson for No Woman no Cry by Bob Marley from Guitar Control instructor and founder Claude Johnson. If you really want to dig into Reggae then click the link for Reggae Roots Guitar Secrets. This Reggae course is taught by a living legend of the Genre and will take you to a new level with your guitar.

You know, tomorrow is a special day because we’re
releasing our first ever reggae guitar course.
It’s called Reggae Roots Guitar Secrets and it’s
from Steve Golding who is a Jamaican legend, in my
opinion. He’s toured with Bob Marley, played with
Peter Tosh and because we’re in the reggae theme,
I thought I’d take a minute to show you one of my
favorite Bob tunes. It’s called “No Woman No Cry”.

Before I jump right in, let me just give you the link
for tomorrow’s release. It’s guitarcontrol.com/reggae.
So go ahead and check that out. Let’s just jump right
into the lesson now.

We’ll start with the verse and we’ve just got some real
basic chords here. We’ve got a C, G, A minor and F. These
are all pretty much basic, open position chords. If you’re
not familiar with that, please check out my beginner course.
It’s at guitarcontrol.com/beginner. But basically it’s just
open chords. A minor and then your F. You can either do this
one where I’m barring the first two strings with this finger,
playing four strings. Or you can do a full major barre chord
with six strings.

Now, the chorus, it’s the same thing except you’re going
to add C, F, C at the end. So… And then G. You can add
that little melodic line. So we have… I’ll show you that
in a second. But just to show you how it fits together
with the chorus, it’s like… Okay?

What we’re doing here — so I’ve got G on the low E
string 3rd fret, and then I have open A string, 2nd
fret A string and then back to the G. Okay? What I do
is I strum it and go into that little lick. So once
again, C, F, C, G and then right back to the C, G, A
minor, F. So that’s pretty much it. 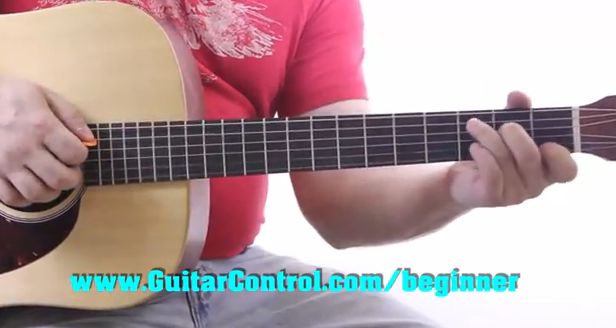 How to Play The Most Common And Basic Blues Guitar Licks

How to Do The Blues Guitar Turnaround | Watch the Video

How to Play Guitar Chords Using the Tapping Technique

How to Play Chromatic Licks on Lead Guitar – Part 3

Guitar lick with legato in one string by Alejandra!

How to Play the Aeolian Scale Pattern on Guitar

More Guitar Tips On How to Do Blues Comping

How To Read And Play Easy Guitar Tabs

Learn How to Play “Satin Doll” on Guitar