Got another lesson of the day for you.

Like I said, some of our little lessons are
beginner, some are more advanced.

This one is one of the more advanced ones
because it gets into the “shred speed zone”.
Still, the patterns are VERY simple and you
can play slower and still have a cool effect.

without further ado, check out my
Simple Shred Pattern Lesson

I’ll have more “Boogie Blues Magic” for you next time. 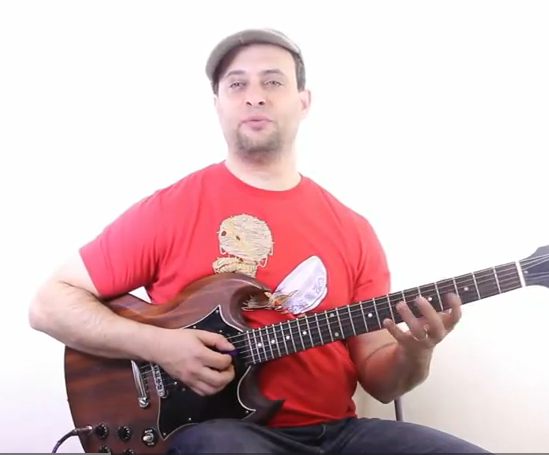 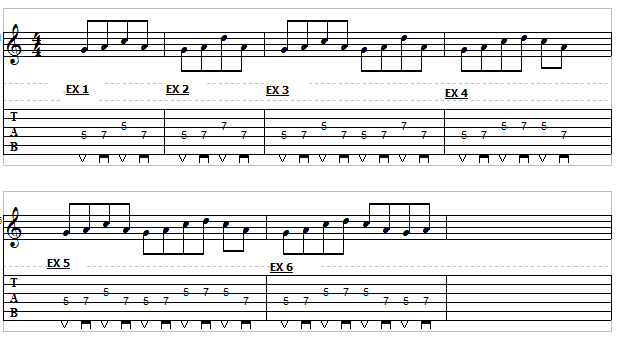 Hey, guys. Claude Johnson here and I want to
show you another box pattern today. Now, I’ve
covered some box pattern lessons in the past.
When a lot of people talk about box patterns
they mean like a whole scale across all six strings.
I’m just talking about a little like
four-note box like this.

First of all, I’ve got a lot of distortion
on today so I apologize if it’s too
distorted for you guys,
but I’m just kind of feeling the
distortion right now.

I’ve done other lessons in the past,
patterns you can do like… Stuff like that.
Today I want to do something even more simple,
just kind of a three-note pattern.
What I’m doing here is I’m on the D string,
so 5th fret to 7th fret, and then 5th fret
on the G string. I’m just going up and down.
Think of it as like a three-note mini scale.

Now, the key to this, I’m doing alternate
picking and I’m starting on an upstroke.
The reason I’m starting on a upstroke is
when I go to my G string I want to pick
it from — I want to upstroke the G string.
Now, I’m not going to get into the mechanics
of why it’s easier to do it that way,
but let’s just go with that for right now.
You can actually start it here on the top.
So upstroke, downstroke, upstroke.

This is great for a number of reasons.
Number one, it’s a great alternate picking exercise.
It will help your chops, your picking hand
and you can really work this up to speed,
as fast as you want. It works not only as
an exercise, but it’s kind of a cool
shred pattern, if you like that kind of
shred style. You can get that cool effect going.
When you do it like that,
just make sure you’re in rhythm.
It helps to get like a slower
thing going. And you don’t necessarily
need to go like all-out as fast as you can.
Sometimes it actually sounds better to go a
little bit slower. It can sound more musical.

For example, if I was playing like… That’s
actually not that fast, but it sounds nice, right?
It is pretty fast. But if I were to go faster,
like…and I can’t even really play it that smooth.
It just sounds frantic, you know?
Even if I am playing fast smooth.
I don’t necessarily need to play it that fast.
I can play it — just dial it back a
little bit. It sounds a little more musical,
but it still sounds really shreddy.

Here’s another variation. Instead of
going like this, you do this. So you’re
flattening-out your finger or you’re doing 5,
7 and then 7 on the G string. What you
can do is alternate between the two.
If you’re in A… You can also slide
up to here to this position and get
some cool effects like that.

Now, this is not just useful just for shred.
You can do it in more of like a slower
blues kind of text, just add a little burst.
You can also do it like this.
Like that. It’s great as an exercise,
a shred pattern. You can use it just as a
little flare kind of thing in blues.
And you can do other kinds of patterns, too.

I encourage you to try to come up with as
many little box patterns as you can.
For example, we just went up and down three notes.
What if we went up and down four notes?
That works good, too. You can speed that one up.
You can alternate between going up three and four.

Another thing that’s cool is you double-up
on the bottom. So this pattern is like this.
I’ve got to practice that one a little bit.
So check the tabs for that. There’s a
lot more ways you can go with this. Hopefully
this will give you some food for thought.

I hope you enjoyed the lesson. You can
get the tab for this and all the other
stuff that I do on guitarcontrol.com/blog.
So check it out and thanks for watching.
Catch you next time.

In this lesson from Guitar Control, instructor Sean Daniel demonstrates how to play Monster by Shawn Mendes & Justin Bieber on the acoustic guitar. This