Here’s a cool little lick I came up with. The key is hybrid picking — use your middle finger of
your picking hand to pluck the high E string in an upwards direction, for each note that is played
on the high E string. You’ll also be using pulloffs and slides. 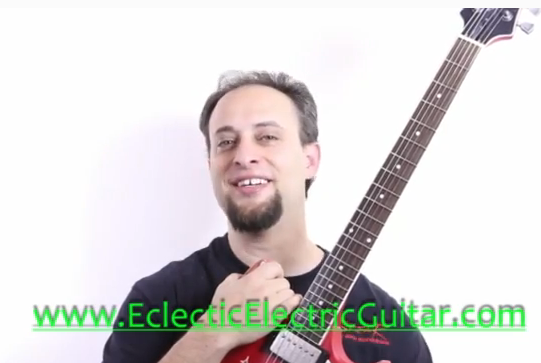 Did you check out our latest course, Eclectic Electric II?


Hey guys, Claude Johnson here from
guitarcontrol.com and today I want to
show you a spicy lick using open strings.
I think you’ll dig it. Check it out.

Let me break this lick into sections.
First section would be like this. I’m using
hybrid picking, so I’ve got my middle
finger plucking the high E string
and I’m also using my pick to hit the B string.
So I start on the 2nd fret with a pluck.
Once again, my middle finger is going up,
so 2nd fret. Hammer to the 4th fret and then
a double pull-off. So I pull-off to the 2nd
and then I pull off again to the open and
then I hit the 4th fret with my pick on
the B string. That’s the first part.

Then what I’m going to do is pluck the
high E string again, and once again,
hit the B string 4th fret. Then when I’m here
on the 4th fret, I’m going to slide up to
the 5th fret. So we have this, which that by
itself is a pretty cool lick. You can hear
that dissonance between the E flat and the
high E. But when it’s going by that fast it
just sounds kind of crunchy, kind of cool.
So that’s a cool lick right there.

But now we’re going to add another up-stoke
to the high E string, so we have this. Got
that so far? Please check the tab if you don’t.

Now the next part, we’re already here with
our 5th fret high E string. We’re going to
slide down and do a double pull-off. That’s
all on the B string. Then we’re going to
repeat that run, but the first note will
be the open E instead. Let’s add those two
licks together. Now notice when I do this,
that second run, I’m not picking the B string.
I’m just hammering-on to it out of nowhere.

Then the last part of the lick is just this.
G string, open, hammer to the 1st fret, and
then 2nd fret on the D string. You can pick
this, it doesn’t matter, up-stroke, down-stroke.
So the whole lick.