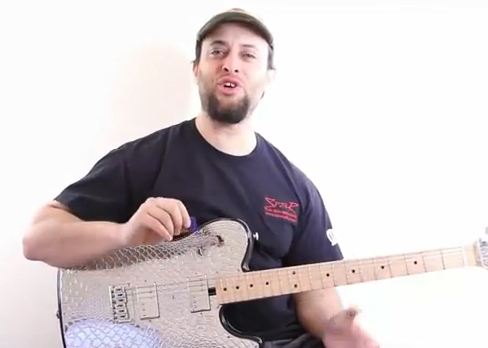 I want to give you a real quick and dirty mini lesson.
I’m calling it 2 Cool Jazz Chords. Now, the name
of the lesson is a little bit of a misnomer because,
of course, there’s no such thing as a jazz chord.
Any chord can be used in any style of music.

So that being said, the two chords I want to show
you are this E7 and this D major 9.
Notice it’s almost the same shape. I’ll show
you the fingerings in a second, but your fingers
can easily get confused with those. So it’s a
good thing to practice switching between these two chords.

The E7, this is just a dominant 7th chord.
If you practice your chord families this is
the middle four strings, the A, D, G and B strings.
It’s this voicing with the root of the note
on the B string, the highest note of the chord.
It’s a great chord for not only jazz, but for funk or rock.

For example… Let’s sat that was your melody.
If you take that chord and you just switch your
pinkie and first finger, as far as what
string they’re on — in other words, your first
finger goes from the G string to the D string and
your pinkie moves from the D string to the G string,
you’ll get this, and that’s a major 9 chord, actually a D major 9.

There you have it. Try those chords out.
Try them in combination with your other
favorite chords. If you’d like to know more
about the chord voicings that I talked
about in general, just check-out
guitarcontrol.com/secrets. I’ll catch you next time.

PrevPreviousSongs in the Ultimate Guitar Song Collection
NextGuitar Chords For Beginners: The most common chord progressions in popular musicNext