Hey guys, Here´s some cool chord voicing for your II V I progressions! Hope you like it… And please don´t forget to check out the lastest DVD from Jon! FAST TRACK GUITAR SYSTEM 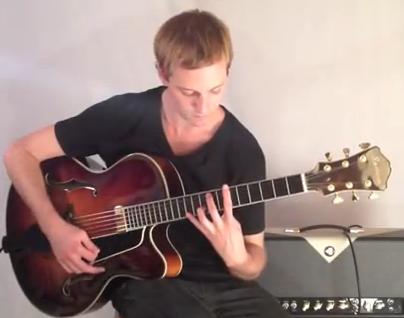 Hey, how’s it going guys. My name is John McClennan and I’m here with guitarcontrol.com. Today what I’d like to show you is a nice II V voicing that I picked up from Howard Roberts. Howard Roberts was a monster jazz guitar player and studio musician. These are just some real great chord voicings you can use over a II V I chord progression, which, again, II V I is one of the most common chord progressions in jazz. Let’s look at this first chord, B flat minor 11. So I have the 5th fret, the 8th fret, 6, 6, 9 and then way up here to 11. And then I’m just barring straight through with my first finger. Then I go to an E flat 13 flat 9, which is 6, 5, 6, 5, 8. And then resolving here to an A flat major 7, basically, major 9, major 13: 4th fret, 3rd fret, 3rd fret, 4th fret, 3rd fret. A real nice, lush chord. Which could also be fingered like this or like this. I do it both ways sometimes. Again, your first chord B flat minor 11; E flat 13 flat 9; A flat major 13. So just some real nice chord voicings, and again, be sure to play that up and down the neck. Here it is on the half-step. Now for the key of A major. And them move it up to B flat. And then B major. So just real nice chord voicings, Howard Roberts. Be sure to click the link below for the tab and we’ll catch you in the next lesson. Howard Roberts II V I. Thanks