How To Use The Basic Chords On Jazz Guitar 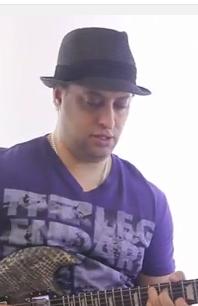 Hey, guys. Claude Johnson here with guitarcontrol.com and
I want to give you a beginner lesson on playing jazz guitar.

We’re just going to start at the very beginning with the
basic chords. It helps to understand a little bit of the
theory so you can get that nice foundation to build from.
If we take the C major scale, which has the notes C, D, E,
F, G, A and B, the first thing you need to do is be able
to build a chord off of each degree of the scale.

I showed this before in another video with triads or three-note
chords. For example, C major scale, you’d start on the first
note and build a chord off of that. Go to the next note and
build a chord off of that. And so on. This is real easy to do.
All you do is basically skip a note. So instead of going just
C, D, E, F, G, you would just go C, E, G. Basically you’re
skipping over the D, go to the E, skipping over the F, go to
the G. When you do that with the three-note chords you get C,
D minor, E minor, F, G, A minor and then B diminished, back to
your C. You get major, minor, minor, major, major, minor,
diminished and then back to the beginning again.

It’s the same no matter what key you’re in. If you’re in A major,
it will be different on the A major, B minor, C sharp minor, but
it’s the same pattern: major, minor, minor. I hope that makes sense.

Now, with jazz we’re usually not playing triads, we’re playing
four-note chords instead of three-note chords. They’re also
called 7 chords, which I’ll show you why in a second, but it’s
the same principle as far as stacking the notes. You skip the
D, go to the E; skip the F, go to the G; and then skip the A,
go to the B. Instead of just this, you have this. This last note,
the B, is also the 7th degree of the scale.

I hope that made sense. Those are the basic chords and in the
next lesson, I’ll show you the most common jazz chord progression
and how you can start putting these chords together. Also, just
a little plug for our jazz guitar course, which I’m actually not
the teacher for. It’s a great pro jazz guy named Clay Moored and
he kind of shows you how to put together jazz standards and it’s
a really helpful course that I promise will save you tons of time
if you’re really into jazz. So go check that out at
guitarcontrol.com/jazz. Thanks for watching.