Hey, this is Matias Rengel with Guitar Control, we’ll be learning this song called “California Dreaming” by The Mamas and Papas. 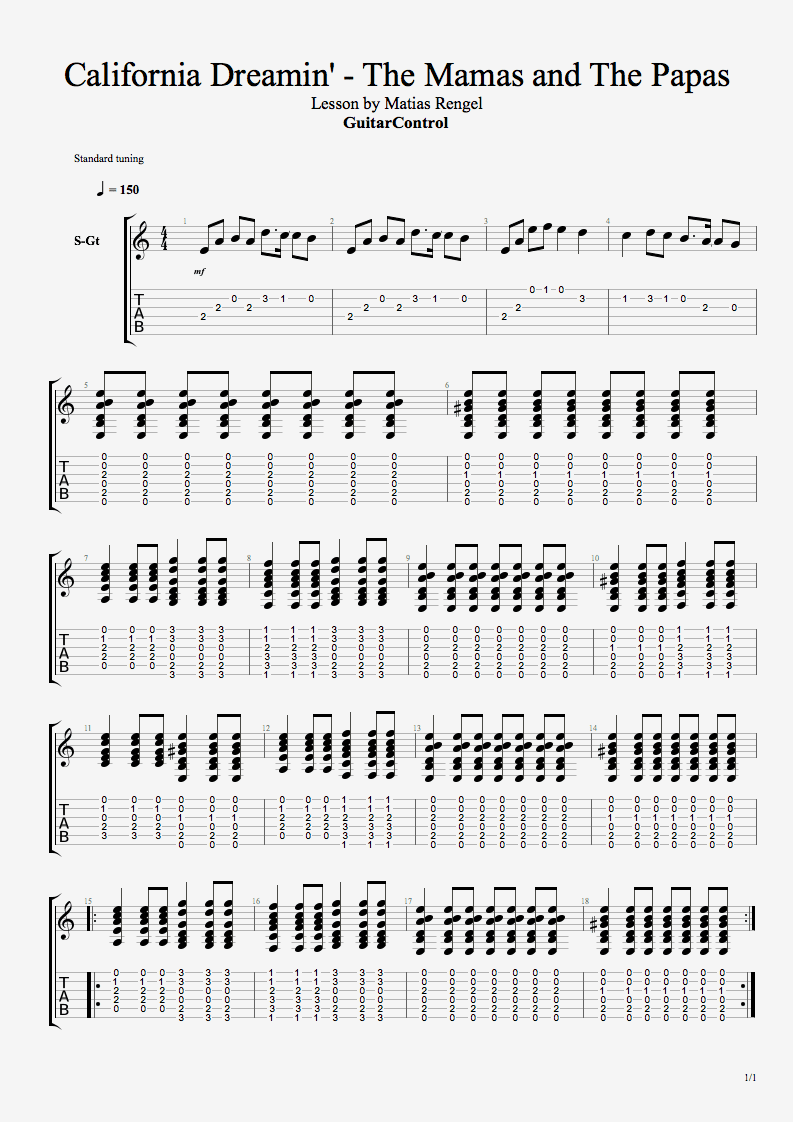 Basically that’s like what the main guitar is doing and then repeats that three times and then at the end you bring down the middle finger to the 2nd fret of the 5th string in that’s your E7 suspended 4. Now the second guitar is actually coming in in the recording coming in like a little bit later and he’s a  so right you got this one and then the chord starts, so I mean I guess you could potentially play both of them together if you can figure it out.

Now for the rhythm, what I like to play this rhythm for this song so we got down, down, up down, down, up down. so basically the only one that changes in the E7sus4 you go down you keep going down upon the ground so we could say one against the one it’s only down and then to see for his down, up, down, up, so run down three four. Now from there you went to E7 and you play down, down, up, in a F in the same with the next one, now the second time we do the next progression I’m the other ones if we’re not going to do since we don’t have the F anymore whenever we go into the E7 suspended 4 and then were going to repeat the same way progression the same rhythm.

That’s your “California Dreamin” by the Mamas and the Papas, a super easy song I mean I think it’s really cool once you like what I would recommend is that you write down write this, you can download and tell which has the probably has the progression on the chords and their page that are playing but I would recommend you the that you download the tab and that you analyze what I’m doing and that you divide this in three different progressions in that C however you want to see it in your brain in your mind and just like and see it visually don’t try to like be like oh there’s the name and see it as a combination of chords okay what I like to do I like to see the roots of the course electricity a dis an a G Ness G so that helps me visually to see what is the next core and like a drawing of the different progressions that are happening but remember that this song is originally play on the 4h fret with the capo so if you want to follow along do that and I believe that it’s not in exactly in 440 in the tuning it’s not accepting 440 I think it’s different so I am not sure what it is maybe 436 437 you could tune it to exactly play along with the song but I would recommend that you find the key that works best for your voice and just playing that key I think that would be the best actually they chose that and it’s not you’re not less of a player if you don’t play an original T just find the key that works for you for singing and that’s it hey but anyways that’s it for today.

I hope you’ve enjoyed this lesson there’s a link in the description make sure you download it to their what I just showed you remember to subscribe to our You Tube Channel and we’ll see you in our next video lessons, thanks for watching.

Easy Intro From “Rock Bottom” by KISS on Rhythm Guitar

How to Play Elvis Presley’s Love Me Tender

Learn How to Play Yellow by Coldplay