How to Play Bebop Lick on Jazz Guitar – Part 2

Today he will teach you a cool bebop lick! 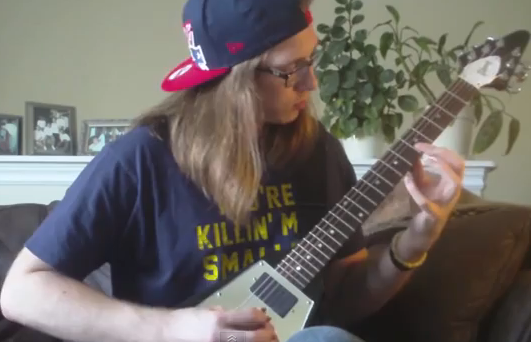 Hello, everybody. This is Cameron Rasmussen for guitarcontrol.com.

Today we’re going to be talking about bebop again. Bebop is
a sub genre of jazz that involves playing melodies and solos
with lots of chromatic approaches at very fast tempos with
quickly-moving chord changes behind you while you’re playing.
It’s the fact that it’s so fast that gives so many people a lot of
trouble and then how fast the chord changes move, as well,
gives lots of people trouble. It’s even a hard genre for
professional, experienced players to play sometimes,
just depending on the changes and so on.

What I’d like to talk about today is a specific technique you
can use for building-up your soloing over such bebop tunes
and whatnot. Instead of starting with all those changes, moving
so fast, we’re going to use just one chord and we’re going to
build a line off of it.

To build a line off of one chord your goal is to get the
sound of the chord you’re using in your line. You do this
by accenting chord tones on the strong beats of a measure,
like the one, two, three or four. You add all your chromatic
approaches on the upbeats, like the and of one, two, three or
four. You can add other chromatic approaches as long as you
land on a chord tone on a strong beat. It will solidify the
sound of the chord that you’re trying to imply.

The lick I’ve made up for you today is a D minor 7 bebop lick
with lots of chromatic approaches around those chord tones.
I’ll show you that now. Here it is again. And here it is slow.

All right, guys, so in the bebop lick I showed you today,
you can hear the chord that I’m implying and that is from
accenting the chord tones on the strong beats. All those
chromatic notes board on the weak beats in between and
their embellishment is on the chord tones.

All right, everybody, please click the link in the video
description if you’d like to see the tab for the lick I
showed you today and I’ll see you next time.