Hey here´s a cool lesson with the great Dweezil Zappa! 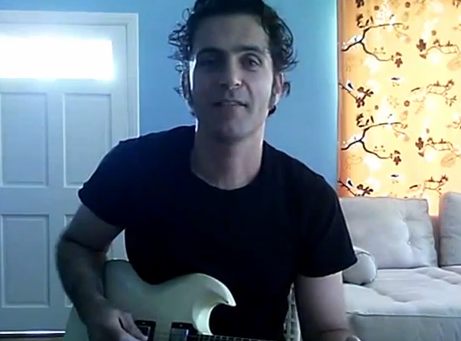 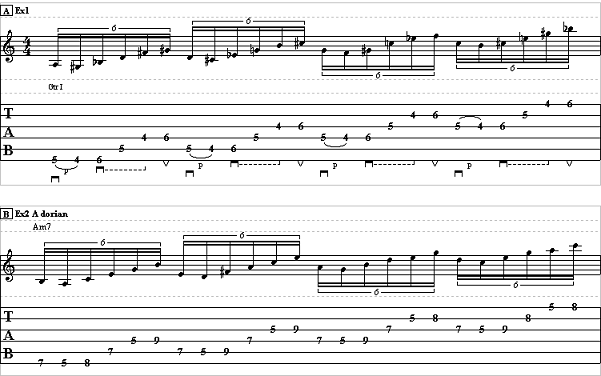 Lead Guitar Lesson – Fusion Guitar Pattern Lick Featuring Dweezil Zappa Hi everybody at Guitar Control. I’m Dweezil Zappa and I have a quick lesson for you. I’d like to show you some sequencing ideas, a way to sequence notes within a scale or within just a random pattern that you can choose on the guitar. First I’m going to choose a random pattern and this, I think, is a good way to learn the picking rudiments of what this exercise or idea is. Here is the sound of the idea. So if you speed that up… You’re going to end right there on the root. But the idea here is not really the notes that I’m choosing, it’s the phrasing and the pattern of what you’ll be able to do when you attach that to a scale, like for example, the dorian mode. That would sound like this. So this idea that I went from — I’m taking the same idea and I’m applying it to a scale. I’ll show you what it is and then you can learn how to do it with any scale that you know or any random pattern. Like, for example, you could take this kind of sound, if you were going to use only this shape across all six strings. There are all kinds of weird, random things that you can do once you learn what the actual pattern is. And that’s kind of fun to just be able to challenge yourself to come up with something that you’ve never played before, but at least you have a tool or a framework to attach the notes to. That’s what this is about. Here is the basic short version with this three-fret space, chromatic idea and I break it up into four groups of three strings. So the first group of strings is the E, A and D and then the next group of three strings is the A, D and G. Obviously, the next one is D, G, B and then the fourth one is G, B, E. Here’s how we’re going to break it up. We’re going to start on A, we’re going to go to a pull-off to A flat. We’re going to go from A sharp to D and then to F sharp at the top here. The way that we do this with the picking, if you watch closely, is downstroke, pull-off, downstroke, downstroke, downstroke and we do that — it’s sort of like an augmented shape here, but we’re not going to play it as a chord. We’re going to actually play individual notes but you don’t strike them individually. You actually just — in one downstroke, using gravity, you actually just play all these notes and you try to, with the fleshy part of your fingers, as you’re playing, mute the string you don’t want to hear. And now you would end with this A flat to finish the pattern here. That could be a hammer-on, and you can also pick it, too. But the way that it gets going when it’s fast, you do pick it. When you’re playing it slower it might actually sound better as a hammer-on. So here’s the deal, all the way through all four sets of three strings. All right, and when you get it going fast it sounds interesting. Now let’s look at it for the dorian mode so you can see how to apply it to a scale. So we’ll start at the B note here and we’ll go to A and then up to C and E on the A string, G on the D string and then B on the D string as well. If you just look at this, you actually end up an octave away when the pattern is complete. There’s different ways you can phrase it, too. But that’s the interesting thing about this pattern and its your choice how you want to use it. But the rest of this scale… So experiment with it and see what you come up with. Try any other kind of random pattern or any scale that you know and see if you can make really intervallic lines with it. All right, well, I hope you enjoyed it; I hope it is useful to you and I hope you get a chance to come to my camp, called Dweezilla, which we’re doing July 1st through July 5th at the Full Moon Resort near Woodstock, New York, and good luck on the contest. Hope to see you there.