How To Play Some Of The Popular Pentatonic Scale Licks 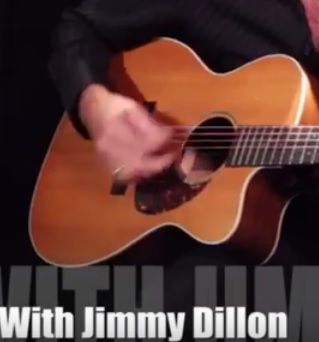 In the third part of Robert Baker’s Ultimate Pentatonic Roadmap of his series, Robert is going to give you some famous pentatonic scale licks, that you have probably heard all the time in lots of different players styes. It’s just nice to see how as this series progresses we have gone from learning the scales, then practicing them, and now we are putting them into use. So hopefully you now have a better picture painted when you’re playing through these than you had before.

Hopefully now you can start to see where we get these notes from and will start being able to take them and apply them into your own playing, which is the goal at the end of the day.

Our first example is going to be utilizing and creating some pentatonic scale licks, by using something we went over in the second part of this series. Just using simply two strings of the pentatonic scale but we are going to put a little more of a sequence to it. This technique is something you may have heard in Zakk Wylde’s No More Tears solo, that solo is in the key of D but we are going to keep it in the key of E we have been working out of. Starting in box number 1, if you aren’t very familiar with your pentatonic shapes make sure you go back to the Ultimate Pentatonic Roadmap Part 1 for a breakdown of each box of the pentatonic scale, there are diagrams up plus a visual and verbal walk through of which strings and frets are used for each box. It’s super easy to follow along and get up to speed with your shapes if you’re not by going back to that video and if you are not familiar with your scale already.

We are going to add one more to this pattern. Now go to the 1st string and pick the 19th fret to the 17th fret down and up using your ring finger to pointer twice, and then to the 2nd string but pick the 20th fret to the 17th using your pinky to your pointer finger, picking down and then up. At the 2:11 minute mark Robert plays the lick all the way through. You can even keep going on this lick if you want, you can start it lower so you have more room, if you refer back to your previous notes from parts one and two. You can apply this lick to any of the strings.

Example two is another pretty straight forward lick that you hear all the time from players like Jimmy Page, Eddie Van Halen, all of these players use this lick. So starting by bending the 3rd string 14th fret with your ring finger, and then barring the 12th fret 2nd and 1st strings.

Robert is bending the 14th fret 3rd string up one whole step, if you were to just pick the note he is bending to on the fretboard it would be the 16th fret. So he is kind of taking a note from box one and bending up to box two. Then he does his barring technique that we did in Robert’s video for Jimmy Page style licks and is just really a popular thing to do in any minor pentatonic blues lick that bends the 3rd string. So after you bend the 14th fret a whole step and barr the 2nd and 1st strings with your pointer, first pick the 2nd string and then pick the 1st string. Then he goes back to the 2nd string and picks the 15th fret with his pinky finger, doing a pull off back to the 12th fret 2nd string. Then he just cycles this over and over again. This is nice because this lick is out of box 1. So say you are in the key of A, you can just move down to your box 1 out of A, the 6th string 5th fret. This is a super moveable lick and easy to move because the root is based off the 6th string, so like we mentioned in videos before, it is really good to know your notes on at least the 6th string. If you know them you can play this lick in an key instantly.

Jimmy Page isn’t the only guitar hero that uses this lick a lot, Zakk Wylde definitely used it in his solos as well. So really this is just one of those rock solid, staple, pentatonic scale licks that is great to have in your vocabulary. And that is example number 2.

For this third lick we are going to do, it is a little bit more involved. There’s lots of picking, it’s a six note sequence, and is a descending lick. You could flip it around and ascend it if you wanted to, but in this lesson we’re just gonna focus on the descending version out of box number one. But again there are tons of guitarists that use this, Zakk Wylde, Paul Gilbert, Eric Johnson, but he tends to use more of a fives kind of vibe.

So onto example 3. This example is descending in sixes. Take box 1 again, it is the most convenient one to start with, before you start to apply this lick to the other boxes and we are going to be descending six notes at a time. Robert demonstrates this lick at the 4:46 mark in the video. Starting our first group of six on the 1st string 15th fret to the 12th with your pinky to pointer, then on the 2nd string do the same thing, and on the 3rd string pick the 14th fret to the 12th fret, ring finger to pointer.

I hope you enjoyed these 3 pentatonic scale licks in today’s lesson and enjoyed Robert’s entire series, Ultimate Pentatonic Roadmap. Remember if you do not feel comfortable yet with all the different shapes of the pentatonic scale, refer back to part one to review all the boxes, in part two you got two different ways to look at practicing the pentatonic scale shapes to make sure you truly knew them, and finally in part 3 we learned how to apply are knowledge to licks and how to add these ideas possibly into our own repertoire or solos. So for all three parts, remember to practice everything slow and that in order to play fast we must be able to play slow. Be sure to pay attention to detail in all 3 parts and all exercises, and of course, as always, have fun! 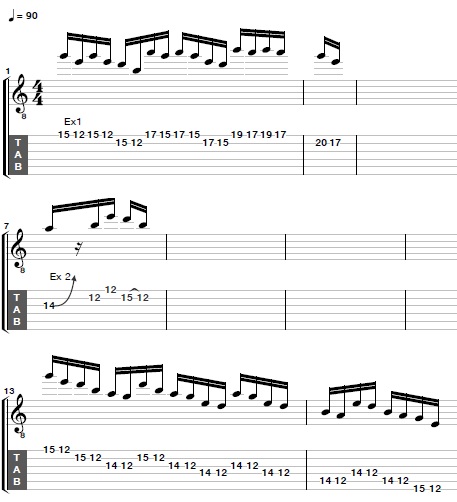