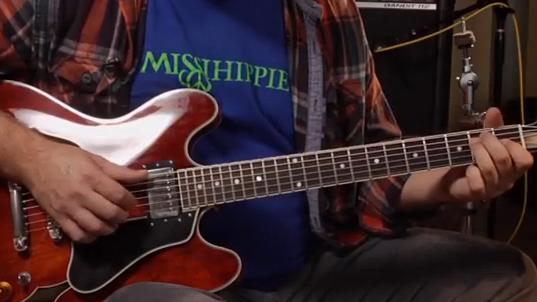 Lets see if you are smart
enough to guess the title of our new Blues
guitar course with Brooks Hubbert.
First one to name it correctly wins a free
copy.

In this Guitar Control video lesson, were going to show something very typical style of accompaniment that that would have been played by either Lightnin Hopkins or John Lee Hooker. I mean there are a lot of guys that use that particular style rhythmic accompaniment and that triplet rhythm is going to be something that you’re always going to be able to use.

We’re going to do something that’s similar to the last piece we did except this time we’re going to do it in the Key of A okay and we’re going to maintain that swing feel. This is going to be characterized again by a one-in-three of a triplet 1, 2, 3, 1, 2, 3, this is a very similar thing to that 1st one it’s got the turnaround but there is another element here that I want to talk about that’s a new cord.

This is a d7 chord, but the way I played it was with the 3rd in the bass. What that means chords of course can have this particular, one has four notes in it D F sharp A and C, here’s your D open, here’s your A on the G-string second fret, there’s your C and then the F sharp is up here on top of that being a 3rd of the chord but the way I voiced it was in the bass.

Now that’s another one of those elements that it is it’s idiomatic why people do it as a matter of taste but you will notice that it happens a lot in the more rural blues styles and I like it because it keeps the low note for the chord in the lower register. The D up here is just a little high for a bass note so by having the bass note down here it gives you a fuller sounding chord when playing an accompaniment part by yourself. So one more time we’ll go over that and let’s go back for that part right here we remember this chord here this is an a7, so I’m walking up to that 3rd on the bass. Now that I’ve got that I don’t need to play this note up here it’s already in the bass, so now I’ve got this free finger I can use to play a little blues rough. Let’s try that part and what I’m doing here is I’m holding this D chord e7 chord 3rd the bass and I’m grabbing that a flat which is remember and the blue scale is the flat five I’m sliding back to the four.