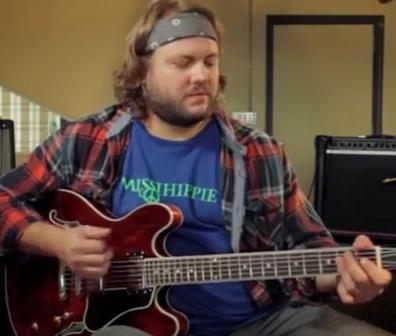 Getting pumped for the new blues guitar
course that comes out in 2 short weeks!

Brooks has played and opened for musicians
from groups as diverse as Tower of Power, Dick Dale,
Steel Pulse, the Pixies, Stevie Wonder, and more…

Try the sample today — it’s a slick riff/rhythm
that you can use immediately.

Of course, when you get the DVDs, you’ll get tabs
of everything.

My name is Brooks Hubbert and Id like to welcome you
to my instructional DVD on blues guitar.

Were going to be going over some of my own personal
favorite influential blues guitarists throughout the
years focusing on styles of delta and hill country blues.
Were going to bring some other elements to it as well,
because in that particular area of Mississippi there are
so many different influences that wash-up into that part.

What were going to do here is were going to set-up
just a groove in E and were going to bring together
some of these techniques. Were going to have some
hammer-ons, youll have a little bends, then were
going to get [unintelligible- 00:44]. Im going to
give you a basic idea of what this is going to be
like up to speed.

What that is here, Im taking this boom, slap and
then Im hammering-on from the open G to the G sharp
here. And then Im hitting an A chord. This particular
move, from the A to the E, hammering-on to the 7th like
that, is one of the most important riffs that youre
going to hear in blues. Im really not exaggerating
saying that you can hear it in about 90% of blues songs.
Its going to be there at some point where youre going
to hear them go As to the importance, this is a totally
usable riff for anyone in almost any blues context.
So, once again

Bass note, then I hit a little pop with the right hand,
then Im strumming down with the index finger, holding
the E minor and hammering-on to the major. Another strum
with the A and then Im hammering back on, open G, G sharp.

After the hammer-on for the last time, Im going to go
E, D  so the E, open string, D Im hitting with my
pinkie here, because I have this blues 7th chord fretted
on the 3rd fret of the B string.

So lets do that even slower. Im hitting open,
hammer-on to the D note here, 3rd fret. So lets
slow it down even more so we can get each part and
then bring them together and then back up to speed.