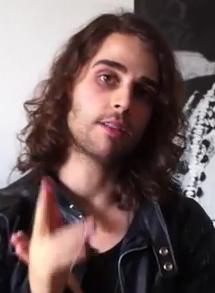 Hey. I’m Will. Thanks a lot for joining me today, guys. I’ve
got another really cool video for you, another cure to a common
mistake that guitarists make when you’re learning right here
on YouTube. Today I’m going to talk about alternate picking.

This video is really connected with the last four videos that
I’ve released. I’ve got two on right-hand stability and two
on how you hold a pick. Now, this is totally connected with
those other videos. So we’re going to get into alternate
picking in a second, but if you haven’t checked-out those
videos they are online and available for your consumption for
free. So go check those out. And if you are all up to speed
with the WillRipley.com lessons, we’re going to learn it from
your point of view. So let’s talk about alternate picking.

So we’ve got this right hand and in my last four videos, we
got our right hand stabilized. We’ve got the pick held in
the correct way. We’ve got that pick on an angle and we’re
looking really good. Nice work, guys. So that’s all solid.

What ends up happening is we most commonly will play down
strokes. That’s kind of like our tendency right off the
bat, is just to down stroke. Now, down strokes are kind of
like your right hand; an upstroke is kind of like your left
hand. Your right hand is strong and you’ve got more control
over it, whereas your left hand is a little weaker and you
have less control over it. However, think about it this way.
What would life be without
both hands?

Same thing with guitar playing. We need both directions
of the pick in order to get the full spectrum of a rhythm
and speed and accuracy and all that kind of stuff.
So let’s put this to work.

Generally speaking, before we start with a downstroke.
So we’ve got all our good stability and pick holding going
on and now let’s start with a downstroke now we’ll go for
an upstroke and repeat. You can do this anywhere, by the way.
We’re just trying everything in with all those other videos
that I was talking about.

So that’s alternate picking for you guys. Keep on ripping it up.

Ascending Scale Pattern in A Major with Alternate Picking

How To Do This Great Electric Guitar Practice Routine

How to Play Ain’t Talkin’ ‘Bout Love by Van Halen