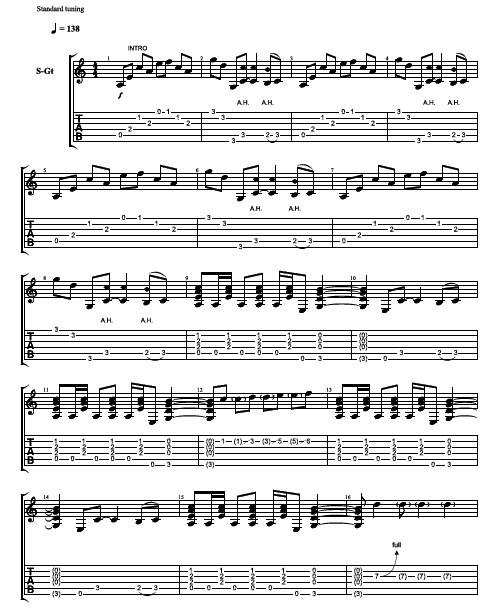 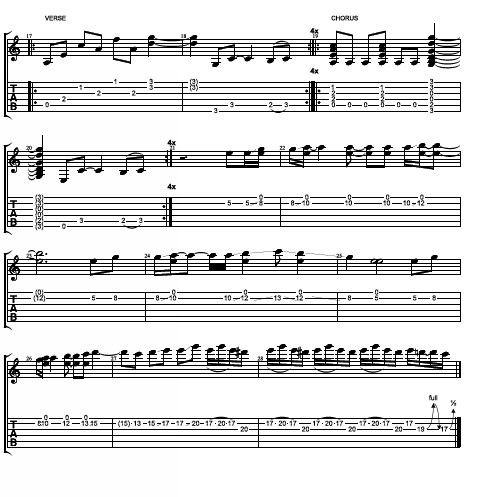 Check the image above to follow the chords and tabs for Ain’t Talkin’ ‘Bout Love by Van Halen.

Hi, this is Stephanie Pickard with Guitar Control, today will go over a few of the main parts for “Aint Talking About Love” by Van Halen. We will go straight over the intro, the verse, the chorus, and the solo.

Starting of Ain’t Talkin’ ‘Bout Love by Van Halen is in the key of a flat minor. In many recordings, they have tuned down a half step, in this lesson, we’re not going to tune down. Remember that tuning every single string down one-half step e becomes e flat, a flat d, d flat, and so on. We will keep it simple, but remember you’re going to play this in the same position.

How To Play Ain’t Talkin’ ‘Bout Love by Van Halen

The Intro for Ain’t Talkin’ ‘Bout Love by Van Halen is based around three major open chords and a minor. An f, and a, g, a minor, f major, g major. To play those chords, we take our pointer for the a minor and place it on the second string first fret, then we take our middle finger. Place it on the fourth string second fret, and put our ring finger right under inside the second fret as well on the third string, and then we strum from the fifth string down because it is an open a for f major. We bar the first and second strings with our first finger on the first fret, holding down two strings with one finger. I have this mine at an angle.

To do the three-finger version, take off your pinky and move your ring finger down one string. The reason for that second string is optional. Open the second string and the second string third fret, both of those notes are inside of a, g major so a, b, and a, and d. I like having the one with four fingers because I think it sounds a lot fuller of an a minor m for that intro riff. We are actually arpeggiating these chords.

First, start with a minor and pick five, four, two, down, down, and have this kind of pretty heavy palm mute, which means I’m like karate chopping the guitar and giving it this kind of tight, more staccato. Our first one, down, down, five four, two, three, all just holding down that a minor chord but picking the string individually one at a time not strumming, then we will go to f major shape, but we are not going to quit holding it down. I pick the open first string then, do my bar where I pick the first string first fret and roll to get the second string first fret then, use my middle finger to play the third string second fret. Feel free whatever you think is most comfortable, Rolling my ring finger to g major as we did with our pointer finger.

Start on the first string then, go to the second, and on the third fret, rolled it, and grabbed that third fret sixth string with my middle finger. Pretty cool so far I go, up, up, down, in this theme that we will do throughout the song. It’s simple, cool, and happens a lot in the song. I do have a lot of vibrato in that last one of the fifth string.

The first part for this next part is continuing the intro but also acts as the chorus later. Start with a strum on a minor down going to pedal, which means we’re always going to come back to this note. Hitting the open fifth string twice, go straight and strum the lower strings of the chord but make sure that you change it up from a big strum. When you hear the highs, to the lows then straight, for this part we are leaving out that f major, then we go to the fifth string, eye strung, then add these two different fills, the first one is all on the second string, it goes like hammer-on to a pull-off and then just a bunch of slides all on the second string.

Starting with my pointer finger planted on the first fret ring finger planted on the third pull off hammer-on. It was a three, and a one, back to three pull off the hammer on, the second string then picks slide to the fifth and a slide. When we keep the pressure down like someone pushed us, we don’t pick up, if we’re going to pick up we will lose all the sustain and not having a slide, losing the point of what we are doing.

Let us fill everything with the same theme that we normally do. The last time we’re not going to do, that slide lick. Do a bend on the third string seventh fret, then match it. As it will sound like this, it will lead to the next part that will complete the intro. Remember the part where we strum will act as the chorus later on, but there might be some different fills. Basically, the same thing for the verse is really similar, we have arpeggiated it just a little bit differently, we’re still going to go a minor.

Let’s check it out if it’s the same kind of idea, a minor down, down, up, the a minor is actually the same, so I went down, down, up, five, four, two, three, for that f. I don’t play the open first of the string, I go straight to the f note first fret of the first string, first fret second string, right to the third fret first string to the g, and third fret second string to the third fret sixth string a minor first. This is a great song for beginners because all the parts are pretty simple and they’re based around those open chords, and the solo is simple, and has three parts, will start with the part one all is on the second string for this solo, also include the high e. Feel free to pick every single note. To start with our fifth fret second string, pick it once, pick it again, and slide it to the eighth fret then, the same thing picks and slide to the 10th fret. Take it two more times and then slide it to 12th fret, having a lot of vibrato in that last one part.

Lick is a little hard if you have not done it before, if it is inside picking, which means we’re still alternate picking inside the strings. Instead of going outsides the two strings, we are picking the inside part and alternate. Inside the strings, we go from the 13th fret, 15th fret, and 17th fret, you will only do it four times. Hammer-on pull-offs 17, 20, and then up pick on the 19th fret third string, and bend. If you have not subscribed to our YouTube Channel. Just click the bell button below to get notifications sent straight to your phone or computer. Leaves us comments, let us know other songs that you want to hear, what parts you loved the most about this song, and what you want to learn more. Thank you so much for watching Ain’t Talkin’ ‘Bout Love by Van Halen. Also, check out our website www.guitarcontrol.com and stay tuned for more videos soon.

How To Do Alternate Picking Arpeggios In Eric Johnson Style