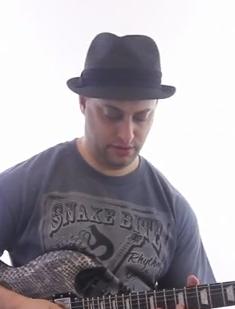 To start out with, forget the fingering let’s just stay on one day and just let’s go up, down, up, down, now a lot of times this is easier with a metronome you can really measure build your speed but I just want to keep it simple or not be fiddling with the metro I just want to teach. You can also do it with all the Metro but it’s actually good because it’s kind of another way to practice it really kind of gets you out of feeling like you have to play at a certain tempo that can really hinder us sometimes as you know we try to play too fast and instead of really feeling it sometimes that’s the key to really building her chops what sort of window I’m just going to focus on playing even and comfortable.

So here we go, we don’t speed it up a little bit it’s a little bit faster keep cracking up to speed here now what we’re going to do next is we’re just going back and forth slowly this is 9, 10, 12, try to keep your fingers close to the fret board let’s do it nice and slow sweet not focusing on speed in the beginning we’re just going to focus on feeling comfortable and keeping our fingers close to the fret board here we go, faster and we go faster, now we can do this patter 9, 11, 12, and again without the metro dome if you’re getting a little sloppy like I’m just getting a little bit sloppy slow it down I can just throw a notes just to keep myself back in the musicality. When you’re playing something as simple as three notes kind and you want to try to have a music, be musical in your head because that kind of creates a feedback loop in your body you may have more musical also just go back to one note if you want to go faster this is like kind of tips you’re bouncing without a metronome as well so go back to one note get that fast tempo then I’ll get that next pattern 9, 11, 13, this is interesting because it could be a diatonic pattern or a pentatonic, so here’s the next one it’s kind of tired a little bit of stretch it’s 9, 11, 14, with a pinky and again let’s go slow another tip is without a metronome you go in a kind of a comfortable tampon and you try to double it you can also do that with metronome so that works so let’s go it’ll be foul shirt got to double that next power is another pentatonic 9, 12, 14, my hands get a little tired so especially with those stretches you don’t force it give yourself a second while your hand is recovering you can do other things practice as far as like you know you know fret board visualization you know how many flats does the key of E flat half where the flat major on the neck okay you think about those sort of things so I think you flat has three flats so you have C and half is one flat E flat is to write you flat so hopefully now my hands recovered I can do this all right again if I’m feeling like I’m getting sloppy get into the musicality of it so that’s how you can start practicing building some speed on a single string really simple and you don’t even need a metronome so hopefully that was informative for you and if you’re interested in playing some fast flashy stuff check out my course supercharged solo made simple just got a guitar controller comic / supercharged and I’ll show you all kinds of cool stuff like that and a lot of other cool stuff so yeah check the link in the video description as well for the top of this will talk to you soon thanks for watching.

How to Do This Killer Tremolo Picking Exercise For Increased Speed

How to Do Speed Picking Exercises on Lead Guitar – Part 2

How to Do Speed Picking Exercises on Lead Guitar