Hey, how’s it going this is Jon McLennan with Guitar Control, I’m bringing you this video lesson and we’re breaking down every song on AC DC’s Back and Black album and these guitar riffs are legendary it’s so much fun to play this stuff this is track number 5 “Let me put my love into you”. I’m going to zoom in and break it down for you let’s do it here we go. 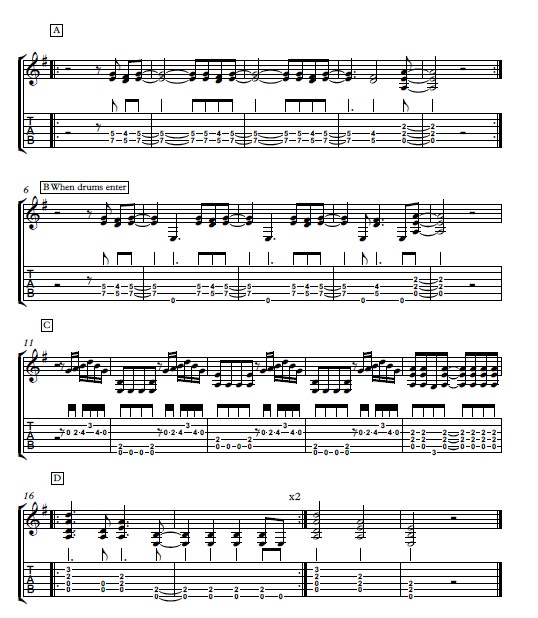 For this Intro riff you’re basically playing these 3rd here and I’m going to put my third finger on the 7th fret of the 5th string then I’m going to put my first finger on the 5th fret the string right underneath, so I get 7 and 5. Now with my right hand I’m not sure exactly how Angus is playing it whether he’s using a pick, I know later for a pick if you want that’s probably the easiest way I kind of like starting with using my fingers though so taking my thumb and my index kind of popping the notes like that.

So to the notes that I’m playing here that was just kind of how I’m articulating it but I’ve got 7 and 5 you’ll play that one and then you’re going to move down same strings 5 and 4 you’ll notice that I switch to my second finger in my first finger, third finger, first finger, second finger, and you go back between those two shapes let me do it again then on the third time walk down five, four and then you play an A chord that would be open A-string 2nd fret, 2nd fret and the rhythm it’s a pickup on the end of three like this 1, 2, 3, wasn’t changing on the ends try together one two three okay then you can’t use a pick if you want him so it sounds like with a pick one more aggressive that’s the first riff will call that riff A and then it does the same thing over and over until the drums come in and then it cranks it up a notch with it that part sounds like that this one too cool again on all these lessons it’s just great examples of rock riffs you know there’s something so it feels so good when you play these riffs especially when I drop that low E note so that’s what he’s doing is he’s taking the riff that we just played and then you’re dropping in a low E after each phrase and I just you with my pick it’s just like right down on that note

Low E, Low E again so at the end there’s two, one more time slowly one two so let’s try this let’s play the first riff two times and then we’re going to transition to the second riff which is the part after the drums enter so here we go one two good job let’s get into the next part that uses some power chords and some cool pentatonic lines.

This next part we’re leading out of that verse part dropping the low key in there and when you come from the A, let’s say you’re going to last tap. I’m on A like one, two, three, so we’ve got this cool little kind of pentatonic lick here and what we’re doing is we’re playing the open 3rd string 2nd fret 4th fret, 3rd fret right underneath then back to the 4th, 3rd string and open and they’re all like 16th notes so they’re all the same rhythmic length 1, 2, 3, 1, 2, 3, alternate picking with the right hand then you’re going to drop down to a low E power chord which is just 0 and 2 and I’m going to palm mute one and accent one and a 2, 1, 2, C, 1, so I guess it would be zeros new charming that one and then play to just low E’s and then the zero, two again and there I’m palm muting but then I’m opening up on the accent like so basically I’m playing the riff I’ll recap that so here’s the riff down and I drop to low E 1 & 2 & 3 same riff again 0, 4, 3, 4, 0, this time instead of going to an E chord I bring it down one string play the A same rep just this time coming off the A chord back down to E, so for all three of those power chords there on chunking you know palm use one and send them everything up and then you go to an a power chord in you play and this is just like a rock move this using tons of classic rock songs with one fingers kind of zero maybe play two of those grab the 3rd fret I might even pull a little bit that kind of classic sound.

Now if you like Led Zeppelin, the rhythm is 1 and 2 and 3 and 4 and again and now we’re into the last part here the chorus and this just consists of really three chords a D and A and E power chord and these shapes are throughout this whole album it’s a D again I’m going to take off the 1st string and just play 0, 0, 2, 3, I guess you call it like a D5 over A and then an A chord one finger and an E chord one finger so it sounds like and we’re back to that figure, D I’m really playing at once and I kind of sometimes we’ll just open strings like as a transition chords it sounds cool so see that the rhythms just want notice that the E comes on and up the you know that and a for so I do and they’re all on the B that’s where the band is kind of all hits those half notes together. I kind of do this cool you know higher part to this basically just taking it up the octave play 9 and 8 to 7 and 7 on the 2nd and 3rd strings that’s cool that’s like an a power chord at 7:00 you rock sound alright well thank you so much for watching I really hope this lesson inspires you makes you want to keep practicing and playing guitar for more information you can click on the annotation on your screen or the iCard if you’re on mobile you can check out some of the courses available through guitar control.com. Make sure to subscribe on our YouTube Channel and we’ll see you in our next video lessons, thanks for watching.

How to Play the Best Rock Guitar Riffs on Guitar