Let´s meet our newest addition to the guitarcontrol team! 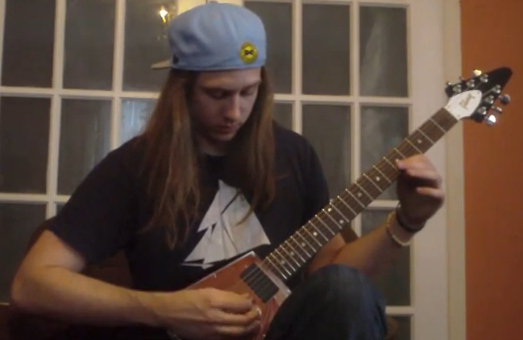 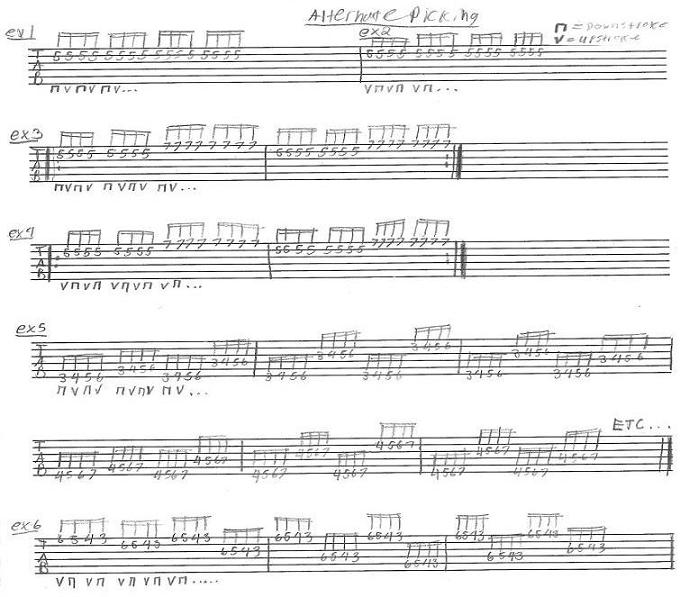 Hello. This is Cameron Rasmussen for guitarcontrol.com.
Today I’m going to be talking about alternate picking.

It’s an efficient way to play fast things depending on
the lick. There are lots of different ways to practice
it and build-up speed, but you need to start slow.
everybody tries to go as fast as they can and you
can’t have any tension in their arm and they’ll
start tensing-up their arms trying to go as fast
as possible and it just doesn’t work-out and
it’s a bad time.

A way that I learned how to alternate pick by starting
slow and simple is by doing one string at first and just
playing one note, not even playing any other notes. I’m
going to start with E on the B string here and I’m just
going to go down. It’s going to start with down-up, down-up,
down-up and just go that way. You set whatever tempo you
need, that you can safely do it at, you can do it relaxed
and you can get it clean. Your downstroke should sound the
same as your upstroke. You really have to concentrate on
that as you’re doing it. Pretty self explanatory; started
with a downstroke that time.

Now one thing that a lot of people don’t say, which I think
is really important to developing alternate picking is
starting with an upstroke as well. So you practice this
same lick two different ways and it takes extra time,
but it’s worth it because you really get cleaner alternate
picking and it really develops your technique better. I’m
going to do the same thing, starting with an upstroke.

That was only one string and obviously you play more than
one string when you’re playing guitar. So the next step
that I took to develop my alternate picking was to play
only two strings and only one note on each string. This
helps when you’re switching strings and it helps develop
that technique at a slow pace as well. It’s going to sound
like… So I’m playing 16ths at that tempo and I’m switching
every two beats to the different note.

This helps you move your hand while you keep the picking
going. As well, you want it to obviously sound even when
you’re switching notes. Like we did before, I’m going to
start with an upstroke to make sure that we get the
technique even and clean before we start speeding
it up. It will sound like this.

Now you’re thinking, well, I don’t only play two
strings when I’m playing guitar. Well, nobody does.
So now we’re going to increase to every string.
First I’m going to play just an exercise, again,
that I use to increase alternate picking, which is
just chromatics. And it’s kind of a string skipping
exercise at the same time, which helps-out your
right hand for switching strings, again, and
keeping your picking even. This exercise is
going to sound something like this.

The one string with the upstroke is actually be
a little bit different; starting on the high E
this time, still basically the same exercise,
just a mirror image of itself. It’s going to
sound something like this.

So if you practice these things — we’re going
to do one last lick that’s often a picking that
you might actually use in a soloing context or
when you’re actually playing. It’s just going
to be in the key of A minor. It’s just going
to go up and down the scale and it’s going to
sound something like this. I’ll play it one
more time.

Now it’s a very simple lick. It’s just up and
down the scale. It’s a little bit more applicable
to something you’d use when you’re playing, but
it’s still more of an exercise. It’s good to just
drill exercises over and over again, learning
this technique because it’s a very important
part of being a guitar player and you need
to master it.

So this has been a good lesson about alternate
picking today. I had fun; I hope you did, too.
Please click the link in the video description
if you’d like to see the tab for the examples
I showed you, as simple as they were, and I’ll
see you next time to show you more picking exercises.

Ascending Scale Pattern in A Major with Alternate Picking

How To Do This Great Electric Guitar Practice Routine