Hey, how’s it going this is Jon McLennan with Guitar Control, I’m bringing you this video lesson and today we’re looking at a song called “La Grange” by ZZ Top. This is such a classic riff it’s a great one to know and I’m going to break the whole tune down for you I’m going to show you how to play that intro and then we’re going to look at the part where the band kicks in we’re even going to modulate up break down a couple of the solo lines and then we’re going to take it out with that turnaround lick. 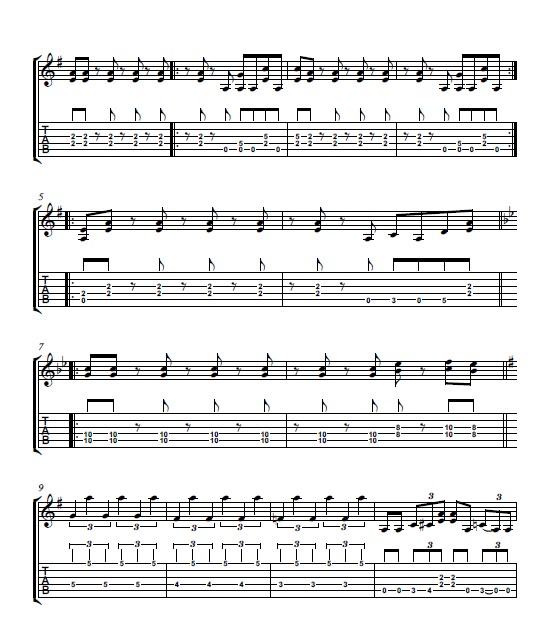 For the Intro I put my first finger on an A5 shape so that’s just taking one finger putting it on the 2nd fret on the 4th and 3rd strings those are my two notes now I play this hybrid picking style, so what that means is I keep my pick here and I use my fingers as well there’s a lot of different ways you can play it this is just how I do it so I’ll show you I’ll show you that way you can hide your pick in your hand if you want play it with your fingers, so I’m holding my pick like this and then I’m using my middle finger and my ring finger and those two fingers are planted on these 2 strings here the 3rd and the 4th strings and what they’re going to do is they’re going to just pull back into the palm of my hand so it’s going to sound like this okay so what I’m doing is I’m muting as well in between so that’s coming from both hands I’m stopping the strings here and then I’m also pumping the chord with my left hand and just covering the strings to get that rest, so that’s the first part.

Then I’m going to reach my pinky up to the 5th fret of the 4th string and I’m going to play that note with just my middle finger here and then I bring my pinky down and I do both fingers with the right hand so what I have to do in between those notes is play the A-string with the pick so it sounds like this and I do give a little pull with my pinky on the 5th fret as well just for a little character, so far slow down I’ve got that 1st part just using pick and fingers so let me play it one more time for you and then we’ll go to the next part, then instead of doing this pinky thing what you do is you keep that A chord playing and what I do is I play the open A stray just like a quick note and then 3 on the 5th string, 5 on the 5th string and back to that A chord quickly.

So it’s just keep looping around and I just do that 1st part with the pinky reach out at the beginning and from there you’re on the secondary part that keeps going and then you know there’s a moment where the band kicks in and once the band kicks in, I’m basically going to switch to all pick and do that same riff. I’m just up stroking those let me hit that last upstroke and there’s a big triplet drum fill and then we kick into a guitar solo which modulates.

Let’s check out now how he modulates up to the key of C minor let’s break it down so after that drum fill we come in and we’re basically taking the same concept of this and we’re just relocating it to the key of C. So you know it’s kind of like but what you can is take your third finger and put it on the 5th and 4th strings just play those two notes 10 and 10 and then you can go to this same double stop 8 & 8 on the 3rd and 4th strings and just smashing your finger down get back to your third finger same strings 10th fret and what I’m doing is just basically where this guitar pick is underneath.

Now we’re going to take a look at some of the solo lines, so if we break down a few of the lead parts here we’re in the key of C and he’s utilizing a lot of C minor pentatonic so he starts out on the 11th fret 2nd string with a whole step bend and then you’re going to descend that’s a really cool lick it’s kind of mixing pentatonic with a little bit of a C minor arpeggio so here’s the descent 8, 11, A back up to 11, and 8 with a pull off, these are triplets then there’s your C minor that little triad in their back up rolling your finger 10, A, 10, I just love that how he doesn’t go straight down a pentatonic scale. Before that we’ve got a measure of drum fill and it’s playing triplets bop up, up, up, up, up, up, up, up, up, and then the guitar comes in it almost just carries on the conversation from the drummer you know it’s like this beautiful interaction between what somebody plays immediately inspires you the improvisation.

And then we go to the next lick is at A hammer to 10, 8, 10, slide to 8, 6, backup 10 to 10 kind of a similar thing, so if I put all that together I’ve got and just kind of noodling around all in this C minor pentatonic, bluesy as you get kind of double stoppie so you can practice improvising there in that C minor pentatonic and you might just want to record yourself going and then practice just you know working some of those lines we’re going to bring it back home to a bluesy turnaround sounding kind of line let’s zoom in and  break it down coming out of the guitar solo we launched into this great bluesy turnaround lick that sounds like this you so what I’m basically doing there is again utilizing hybrid picking with my right hand I’m taking my second finger and playing the 5th fret on the 4th string then putting my third finger on the 1st string 5th fret and this is going to be every other note so I’m going to move down to 4 and 3 and then end. With this little figure 0:03 if you want you to go to three-zero-zero. I really hope this lesson helped move you forward with your guitar playing for more information you can click on the annotation on your screen or the Icard if you’re on mobile and check out one of the courses at guitar control.com. Make sure to subscribe on our You Tube Channel and we’ll see you in our next video lessons, thanks for watching.

What You Need to Know About Bluegrass Guitar Licks