Hey, how’s it going this is Jon McLennan with Guitar Control, hope you’re doing fantastic and I’m bringing you this video lesson on a song called “Roll on down the Highway” by Bachman Turner Overdrive. It’s got some great riffs in it and I’m going to break it all down for you. 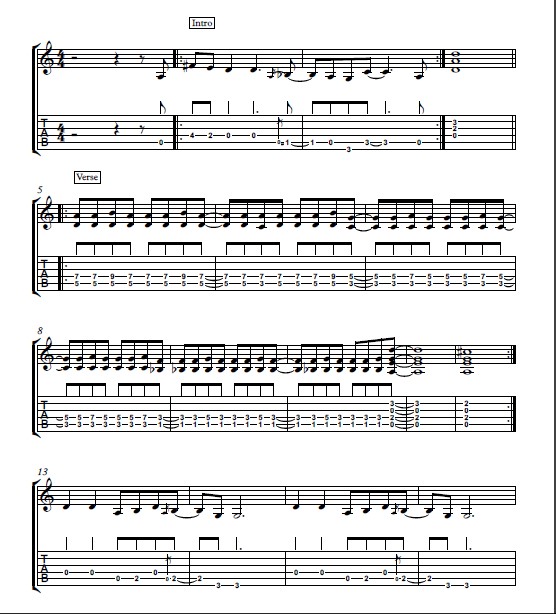 Now on the recording it sounds like doing a little hammer-on in there, kind of a grace note. Open just immediately to the 1st fret. Then I end with just a d5 cord, it’s like a D major meaning my first finger on the 2nd fret 3rd string and then my third finger on the 3rd fret 2nd string and I’m really just omitting the 1st string of a D chord, some dampening going on and I’m muting the 1st string and the 6th. You’ve got the intro down; let’s move on to the verse.

For the verse, we move into sort of this chunky power cord kind of rhythm and blues like root 5th, root 6th, kind of movement and what it means is I’m putting my first finger on the 5th fret and then my third finger on the seventh fret and I’m going to play those two notes together it’s called a power chord.

What I’m doing is palm muting with my right hand, I’m getting this muted sound where the string kind of meets the saddle piece there on the bridge. And then I’m playing that power chord on beats 1, B2 & 4, 1, 2, 3, and 4. My pinky’s going out and playing the 9th fret, a whole step above where my third finger is playing and there are some rhythmic accents as well. What I’m doing is accenting 2 and 4 and then I’m also accenting the end of 4 so 1 and 2 and 3 and 4, then I’m going to walk down a whole step two frets to the third and the fifth and doing the same exact thing.

Again it really emphasizing the end and the cords are changing on the end of four, then I do the same thing I keep walking down it’s a nice descending chord progression I’ve got 1 and 3 on the 5th and 4th strings 1 and 2 and 3 and 1, basically copy pasted the same thing. Moving down two frets at a time, I go to an open a 7sus4 chord. What I’m doing is 0, to 0 and 3 and hi E as well.

Sus chords meaning that the note goes back down to a normal A 7, let me play the whole verse. Notice that there are two bars on each chord you know two bars on a D, two bars on a C, two bars on a b-flat, two bars on an A. Although it does go from in a A7 sus to an a7, which gives a little lift because the chords builds the energy there.

That’s kind of a cool thing is just picking the last notes, you arpeggiating them. One other thing that I noticed that I’m doing is I’m lifting up on the end of four, not only I’m hitting that note harder with my pick as an accent but also opening up the palm muting to get the note jumps out a little bit.

Next is the chorus riff, one of the things you got to do if you play in a band. The guitar player a lot of times play riffs over different parts of the song and a lot of these riffs make the song amazing. so I’m Starting out on an open D string and 4th string and playing it twice one, two, then I’m going to the open A string then the 2nd fret of the A string and back down to the D string 4th string.

After that 4th string I do a hammer-on the 5th string open to the 2nd fret and then I play the 3rd fret on the 6th string. NAT riffs going to go 4 times and then we’re going to change it on the last pick. What I did there was I play two zeros and then play the open 5th string just like before the previous riff, but instead of doing a hammer-on you’re going to launch into a series of power chords one, three, 5th string 4th string climb it up two frets three, five, climb it up two frets again. This you know epic chord progression that just walks up to D it’s actually the reverse of what we were doing in the verse which is pretty cool.

Let’s try the whole chorus. I hope this video lesson really inspires you and makes you want to keep practicing and keep playing guitar for more information click on the annotation on your screen or The I card if you’re on mobile and check out one of the courses from Guitar control.com. Thanks for tuning in and we’ll catch you in the next video lesson.

How to Play Peaceful Easy Feeling by Eagles on Acoustic Guitar

How To Create Rock Riffs – Know The Guitar Scales Needed

How to Play Bad Motor Scooter by Montrose on Guitar