The blues is a musical form that can be traced back to African-American communities in the deep south near the end of the 19th century. Lyrically, the blues encompasses heartbreak in all its incarnations, including poverty, unrequited love, and death. The musicians who played and sang the blues were certainly in a position to be singing about such topics, which is why it’s often believed you have to live a hard life to be able to play the blues with any conviction. I won’t argue the validity of this belief, but I will say that by gaining an understanding of the musical elements that make up the blues, you can play the blues. The convincing part will be up to you.

Let’s start with a blues chord progression. One way to get familiar with the blues scales is to practice playing blues licks over a blues progression. The notes of the major scale can be numbered with Roman numerals (I II III IV V VI VII) to indicate the degrees of a scale, or the notes in the scale, you’ll be using to build a chord progression. 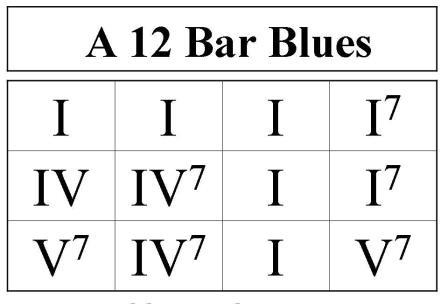 If you can do it, consider making a recording of you playing this chord progression and then loop it so you can practice your blues guitar scales over the playback.

The blues scale is a hexatonic scale, meaning it six notes. The pattern for this scale, which you can apply to any key, is tonic (root), flatted third, fourth, flatted fifth, fifth, and flatted seventh (1-b3-4-b5-5-b7). Apply this pattern to a major scale by omitting and adding the appropriate notes and you get the blues scale. The C blues scale, for instance, will have these notes in it. C, Eb, F, Gb, G, Bb. The hexatonic blues scale is a minor scale, but you can you can play it against major or minor chord progressions. You’ll note also that this is a minor pentatonic scale with the flatted fifth added, which is the note referred to as the “blue note” because it is the odd note in the minor pentatonic and gives the scale its unique color, or sound.

Now fire up the chord progression you recorded and improvise some blues licks over it using the blues scale pattern above. Don’t think about the theory behind the notes you’re playing. It’s a good bet most blues players are more concerned with how the music feels and how it sounds, not how it’s constructed from a theoretical standpoint. The blues is about emotion, so let yours take over as you explore this most important scale.