Know How To Practice Playing The Guitar

During my first year of learning to play guitar, I practiced regularly – mainly chords and songs – and was generally satisfied with my progress. But after learning the three main chord groups (major, minor, and dominant – basically enough to play every Beatle song in their catalog), plus the major and minor scales, I became frustrated. It seemed that I wasn’t really getting any better; I had reached a plateau. After all, there are only so many ways you can form or voice an E major chord. And so, practicing guitar began to lose some of its charm and appeal. Although I still loved the instrument and continued to play, I knew instinctively that something had to change.

Thankfully, in addition to playing guitar every day, I also subscribed to every guitar magazine available. To me, reading about guitar is almost as fun as playing, and indeed, you can learn a lot from interviews with rock stars and columns written by professional guitarists. It was in one of those columns that I came across some advice from a guy who catered to beginning and intermediate guitar players. One of his favorite things to talk about was the ins and outs of practice, and this particular column focused on the problem I discussed in the first paragraph. 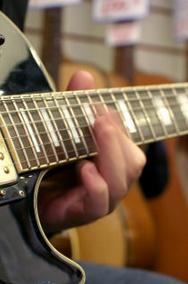 The most important aspect of practice is quality over quantity of time spent, and thus, time management. I had fallen into the trap of practicing only what I had already learned, and really hadn’t focused on learning new skills, such as fingerstyle techniques, sweep picking, string skipping, etc. All of those skills were readily available to me; I just didn’t know that I would need them some day. Therefore, in a way, I was really wasting a lot of practice time; hence, poor time management. The columnist suggested that rather than practicing what you already know, always start off a practice regimen with what you don’t know.

Check out this lesson on HOW TO PRACTICE GUITAR

One way to figure out what you want to do on guitar is to make lists of your goals, your strengths, and your weaknesses. I know it might sound corny, but it made all the difference in my learning curve. After writing down what I wanted to do (write songs, play in a band, achieve rock n’ roll super-stardom), I listed what I was good at, and what I wasn’t. As it were, I was strong in chords, but woefully deficient in scales, modes, harmony, and song structure – and those were the things I really needed to know. From that point on, every practice session began with the unknown. And for a beginner, there’s far more you don’t know than what you do know. So, I began to understand that practicing guitar is more about how and what you learn; as opposed to how often you actually practice.

I also want to recommend you to check out this course in DVD: