One of our instructors, Derryl Gabel recently gave lessons to Dweezil Zappa and jammed on stage with him!

DWEEZIL BRINGS ON DERRYL AS A SPECIAL GUEST (SEE 3:05)

also he has a cool story about going to dinner with Dweezil:

“I invited Dweezil to go out for dinner with my family and I. I decided we would go to this well known Irish Pub / restaurant called McGuires in Pensacola, FL. A lot of famous people have been there to eat so I figure why not bring Dweezil there. So I called in advance because the place stays packed. I spoke to this hostess and asked how long the wait was. She said about 30 minutes. I said, what if I had someone famous with me haha! She said who? I said Dweezil Zappa. She said, hold on. This guy named Rick got on the phone and asked who this was and I said Derryl Gabel. He said I think I know you. He said this is Rick Abercrombie. I’m like, dude!!! (Rick used to live down the street from me when we were kids. I use to go over to his house to play guitar because I didn’t have one at the time. I figured out my first guitar solo over there. It was Twisted Sister, “We’re Not Gonna Take It!” LOL!) I’m like, can you believe this is happening??? Anyway, he got us a VIP spot and we had a really nice dinner compliments of Rick and McGuires. Thanks Rick! McGuires will have our picture up on their facebook page. I’ll post some more pics later.
By the way, it’s a tradition at McGuires to sign a dollar bill and they hang it up so this is not Dweezil leaving a tip haha! They had wonderful food and service. McGuires graciously paid for our meal but we made sure to leave a big tip. They are framing this picture and putting it on their wall of fame. Thanks to Rick Abercrombie and McGuires!” 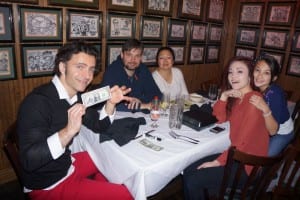 ** I will probably we interviewing Dweezil soon… What should I ask him? Please comment !!!

If Derryl’s good enough to teach Dweezil Zappa, imagine how much you can learn!