Blues guitar is one of the great genres for guitar players, and it’s one that every guitar player should have at least a passing familiarity with. So much of rock and folk music find their foundations in classic blues chord progressions and song structures, having a blues lesson or two up your sleeve is always a good idea. Here are the blues chords guitar basics and an introduction to the “blues” scale. Blues chord progression Traditional blues songs are typically twelve-bar blues progressions. This is by far the most popular twelve-bar blues progression: I – I – I – I – IV – IV – I – I – V – V – I – I. If you’re a beginner guitar player, this chord progression may look really scary, but it’s actually pretty simple. I is the tonic chord, IV is the subdominant chord and V is the dominant chord. The roman numerals stand for certain chords in a particular progression. For example, if we were playing this twelve-bar blues chord progression in the key of A, here’s what the progression would look like: A – A – A – A – D – D – A – A – E – E – A – A. In this example, A stands in for I, D stands in for IV and E stands in for V. If you keep your ears open, you’ll certainly hear this progression in blues music but also pop music as well. The seventh chord When you hear a blues song, there’s usually something about it that just jumps out at you. If it’s not the chord progression or the scale, maybe it’s the seventh chord. The seventh chord is a really popular tool for blues guitarists; it gives your chords a very “bluesy” feel. Give them a try! 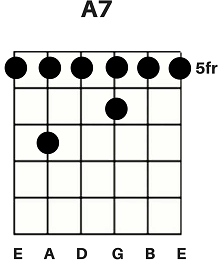 The “blues” scale When I was first learning to play the guitar many years ago, I was obsessed with finding scales online and memorizing them. I spent hours every day going over every single one of the scales I knew, and it was a great exercise, but ultimately I don’t use most of the scales I know. This isn’t true of the pentatonic scale with the extra “blue” note, also known as the “blues” scale. Typically, you don’t land on the blue note; instead, it’s used as a passing note. When you play the entire scale, you’ll hear the “blue” in this note. This scale is extremely important for guitar players. Many of the other important scales you should learn are just extensions of the pentatonic scale. It’s easy to get stuck in this basic pentatonic pattern, so it’s important to keep learning more scales and using them together, but learning pentatonic patterns up and down the fretboard is key to unlocking the neck of your guitar. It takes years to become a good blues guitar player, but learning the chord progressions, scales and seventh chords are great ways to get you started. 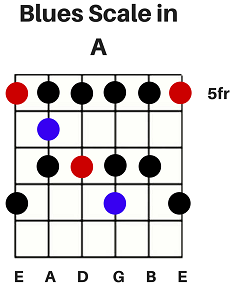 If you like blues and want to go way deeper, I recommend you to check out this course in DVD: BLUES MASTER CLASS

How to Play The Stumble On Guitar – Freddie King Guitar Lesson

How To Solo With The Major Pentatonic Scale