How To Play “Walk Of Life” By Dire Straits On Guitar

Hey, how’s it going this is Jon McLennan with Guitar Control, I’m going to show you how to play the song called “The Walk of Life” by Dire Straits. I spent a lot of time sitting down with this recording listening to it over and over trying to figure out what the heck Mark Knopfler. It’s based off a typical blues rhythm pattern but it does some cool stuff, so we’re going to play with our fingers. 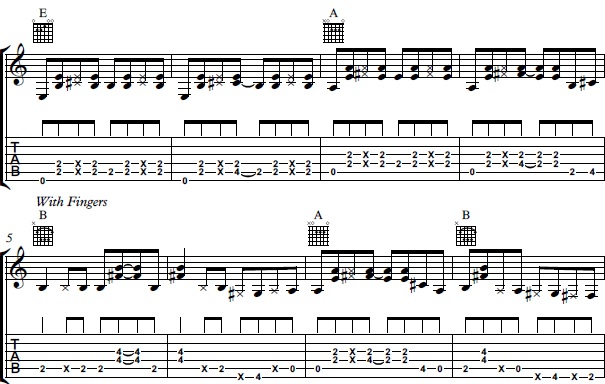 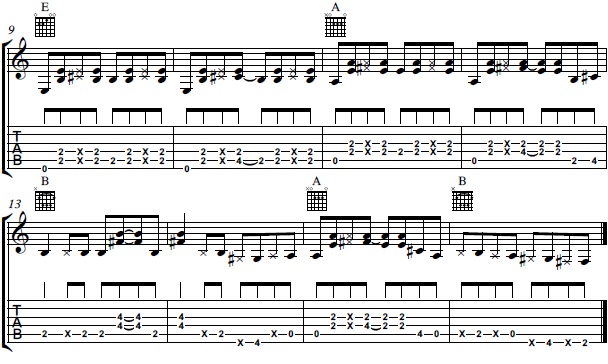 I’m going to break it down for you in a couple sections we’re going to look at the chorus. I’ll take you through the whole song and let’s zoom in and break it down. The essence of this is just a blues kind of rock and roll rhythm pattern and we’re going to start with the left hand. First finger down on the 2nd fret on the 4th and 5th strings, I’m going to create this E chord by playing the low D in there as well and we’re going to go 1 & 2 and 3 and 4 just a typical kind of blues pattern here 1 & 2 & 3 & 4 & 2 now once you get that comfortable let’s start to work on the right hand so what’s going on here is you start with a low E and then your index and your middle fingers are on the 4th and 5th strings and they pull up just pulling back into the palm of my hand 1.

The first beat is thumb and then you come down on the strings with your nails just the backside there and you get that chick sound, that one and two and then you go down with the nails then you come up. You’ll notice with my left hand I’m putting it down the 4th fret just like what we’re doing see I’m kind of ghosting that note, so it’s thumb left hand goes down on four while you do the slap here and then you take it off and come up again on to two so one pretty crazy okay and then our thumbs going to come down and play the 5th string 2nd fret and then copy/paste the rest.

That’s going to be same as before thumb, my hand goes down on the 4th even though I’m just kind of creating a sound but I can kind hear the note in there even though it’s like an X, its mute and then back to 2. So I’m going to do it very slowly for you I’m going to say it all as it goes so it’s thumb claw thumb on a different string you along and again on the mutes we’re tapping down here with a 4.

It’s pretty crazy, it took me a while to figure this out and I hope I’m right it’s pretty close one and the cool thing is you get this bin I don’t got a to me thing going so slowly and a Swami is you can like lucky and you know pop in as you can make it the better you know I can get back here but rich more and just get this more of a snappy sound he’ll do little variations like he’ll go and do a pull-up so you might alter name and then he’s going to relocate that down to A, we look at the verses then we go.

Nice work don’t forget to go slow let’s jump into the chorus so after that 14th fret bend which sometimes I noticed he plays it down the octave ah kind of makes it more it sounds bluesy down there. To me that would be a slide to four play the open E and slide back to now we’re going to go into the chorus that is basically an E chord one, two, that’s our original pattern and then you play the 4th fret 6th string open on the 5th string, so it’s a walk up to a chord which is played like this. I play my pinky across the string and that bar so what I’m doing there is numb claw or certain arms down with the nails let’s see and then you go back to E per song about the knife whatever the words are E 2, and 3, and 4, then to A.

Sometimes I’ll do that little fill like which is just a zero then back to E so that’s one, two, it’ll pull there 5, 5, 4, 0, back to B so yeah you do I love how he says when you do the walk and then the riff like kind of walks so instead of doing this I can get doing the whole time you guys and that would be B and he takes us thumb and touches that F sharp note and then you do this descending kind of popping thing and what that is if you look at my right hand I’m putting its chicken pick and I’m putting my first finger on the 5th string and I’m plucking it with my thumb but it’s not getting any sound it’s just dead and then immediately after I pull with my index finger and you do that on each string to open for all the way down to the E back to that original pattern again.

Alright well, I hope you enjoyed this video lesson and for more information you can click on the annotation on the screen or the iCard if you’re on mobile and you can check out one of my courses if you’re watching this video you might be interested in one of my courses called blues power has a lot of similar lessons taking you through the roots of the blues. Make sure to subscribe on our YouTube Channel and we’ll see you in our next video lessons, thanks for watching.

Lessons on Chords and Rhythm Guitar

How To Play It’s All Over Now, Baby Blue By Bob Dylan

How to Play Pretty Young Thing By Michael Jackson

Get Out Of The Scale Rut With This Easy Sequence

How to Play a Basic Blues Shuffle Rhythm Pattern

Learn How To Play Hell’s Bells By AC/DC

The Thrill is Gone Lesson