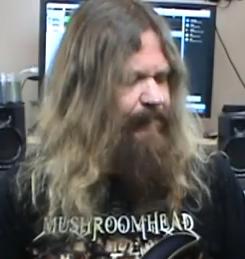 Hi everybody. This is Darrin Goodman from guitarcontrol.com
bringing you this little video lesson today. Today I want
to show you how to play a cool lick. Its a Steve Vai lick
from the intro of the song Tobacco Road thats on the
first David Lee Roth solo album after he left Van Halen,
Eat Em and Smile. If you have never checked out that
album, you really should. Its got some of Vais best
playing, in my opinion, ever on it; great line-up for a
band. Anyway, be sure to click on the link in the
description for the tabs and lets get started.

This is a really simple lick thats based in the first
pattern of pentatonic minor. Were in A. Hopefully you
already know that scale. If you dont, check through
the other videos. Theres probably numerous videos
that teach you how to play that scale.

For those of you that are not aware of how to do these
pinch harmonics, what Im basically doing is Im taking
the pick and the way that Im holding it, Im choked-up
on the pick really far, which you should do anyway. Think
of the guitar pick as like a pencil. When you write you
dont hold the pencil out on the end where the eraser is;
you choke-up on it. When I pick the string Im going to do
it so this fleshy part of my thumb right here makes contact
with the string when the pick does. What that does is it
gives that cool, squeal sound.

Depending upon where you pick on the string is depending
upon like how good of a harmonic you get. Im not sure
if you could see that. So like when Im See, different
places sound better than others and it depends on what
fret youre on as to where that is. So thats something
that takes a lot of practice to really get that down.

Im going to hit that note as a pinch harmonic and Im
going to bend it and release it a couple of times. So weve
got Now Im following that back to the 5th fret of the
3rd string and then to the 7th fret of the 4th string.

I hope you enjoyed that. Be sure to click on the link in
the description for the tabs and until next time