Jon Maclennan is coming out with a new course called “The Fasttrack Guitar System”,

one of the big themes is how to play songs by ear.

Rhythm Guitar Lesson – How to play songs by ear
Get right back up on the bridge and you want your notes
to pop-out, have a real tight sound. What I’m doing here
is I’m playing twice and then when I strum I let-up the
palm mute and just let it strum normally. So you might
just want to practice that for a little bit. Just a
cool rock groove.

And then you’re going to apply that to a G, which
here is our G bass note on the 6th string. Same
thing. And then last, but not least, D. Here we’re
moving to the open 4th string. So let’s put
it all together slowly.

Now notice this song begins on an A minor chord
and it’s important as you’re playing by ear to
learn to distinguish the difference between a
major sounding chord and a minor sounding chord.
So you might just want to try this for a second
here and play an A major chord. Again, all of my
fingers now are on the 2nd fret: 2, 2, 2. And
then notice when we go to the minor that we take
this note, this note on the 2nd fret, which is
a C sharp, we lower it a half step and we get
A minor. So it’s really just one note difference
between the A major and the A minor. You’re
trying to play a song by ear and you’re playing
an A major chord against a recording or someone
else is playing a minor, it’s a big clash, but
it’s just one note. So that’s a great way of
trying to figure out a tune.

Let’s say you figure it out. Okay, we were talking
about trying to play bass notes against the recording.
If you figure out that, say, the bass note of this
Tom Petty example is A, and you go, okay, does it go
like this… Or did it go… Now immediately my ear
tells me that it’s a minor. So what you might want
to do is — so you can get to that point — is play
against the recording, play that note, that one note
that makes it major, C sharp, or is it C natural? Ask
yourself what sits right? What feels like it sounds right?
And if one is sounding really dissonant or warbley to your
ear, then that’s probably not the one. You want to make
sure that you get the right chord in there.

The next two examples are in the style of Jimi Hendrix,
“The Wind Cries Mary” and “Hey Joe”. Here we’re going
to be applying a little bit of barre chords and all of
our caged chords, which we discussed in the beginning
of this course on the first DVD. So this will reinforce
those basic open shapes. Here we go.

What we’re going to do here is we’re going to play on
the upbeats, on the and, like this. So I have an E and
then we’re going to wrap it up with a big G, going back
to C, which is the 5 chord going to 1. So let’s see if
we can put all this together, changing chords, syncopation,
analysis. We’re getting a lot accomplished here. Here we go.

So many tunes use this strumming pattern. It’s one of the
most common in music. We’ve got a quarter note here, then
we play two 8th notes. Don’t play beat three and then come
back in on and-four-and. So it’s one, two-and, three-and,
four-and. That’s a great pattern and it’s something I think
in particular to work on for that sort of feel-good,
campfire-y, big acoustic guitar strumming sound.

This next example is in the style of Green Day. The song
reference is “Time of Your Life”. We’re going to take the
same exact rhythm that we used on the previous song. 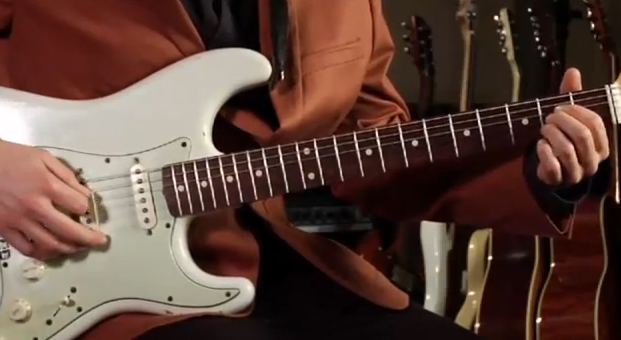