How to Play the Intro and Riff From “You Give Love a Bad Name” by Bon Jovi from Guitar Control. This is an iconic 80s track that you will love to play for your friends and family. Be sure to get the free tabs to go along with this lesson. 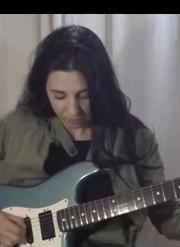 About You Give Love A Bad Name

“You Give Love A Bad Name” is the first single from Bon Jovi’s third album 1986s “Slippery When Wet” and is also the bands first number one single. The song was named the 20th Greatest Hard Rock Song Of All Time by VH1 in 2009. In 2007 the song returned to the charts after Blake Lewis performed it on American Idol.

Bon Jovi is an America rock band formed in New Jersey in 1983 by vocalist Jon Bon Jovi. The band has gone through a couple of lineup changes that include original guitarist Richie Sambora leaving the band in 2013. In 1986 the band released their third studio album “Slippery When Wet” which launched them into superstardom. The album gave them three top ten singles, two of which went on to number one on the Billboard Charts, and went on to sell over 20 million copies. Bon Jovi has released 15 studio albums, three live albums and five compilation albums to date. They have sold over 100 million albums world wide making them one of the best selling rock bands of all time.

In 2014 the band announced that original guitarist and song writer Richie Sambora had quit the band and was replaced by touring guitarist Phil X. The band says that they hold no animosity toward Sambora and wish him all the best. Sambora said that he has no bad blood with the band and that he is still friends with vocalist Jon Bon Jovi and that says that a return to the group is a possibility.

How to Play Basic Chromatic Licks On Lead Guitar – Part 3