Hey, how’s it going this is Jon McLennan with Guitar Control, we’re breaking down AC/DC Back and Black, the whole album every song step by step this is song number eight “Have a Drink on me”. 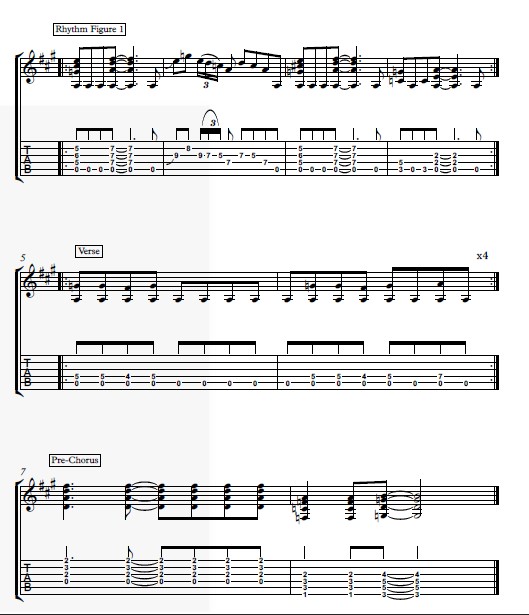 This is a really cool riff that starts us off here and to me it’s very bluesy it’s almost sounds like a blues turnaround lick or just something real down-home but you know adapted by Angus Young so really cool Blues is definitely close to my heart in that kind of sounding licks so you start out I would use my third finger on the 3rd string 7th fret and slide into the 9th and then drop your second finger and put it right underneath on 8th on the 2nd string so you get this let both those notes ring together so that’s how the whole thing starts and these kind of give it a little bit of a broad and you descend with this lick.

What that is again restarting through our up here slide into that little to note figure then you go back down to seven do it again seven slide at nine play eight then you do a slur from nine seven five so all on one string there so I’m alright I slide down to seven and I pull off the five so kind of a classy  classic blues ornamentation kind of selling and then you end on the root in the key of A, so that’s you’re A note and 7th fret 4th string and then what I do is I roll my third finger over so I kind of do that motion to the 7th fret on the 3rd string back to 5 back to 7 on the 4th string then play to get and sometimes just my natural sort of clapped any mannerisms you know or blues influences I bend that five just a little bit it’s just like how does a flat third sound so let’s back up we’ve got 1, 2, 3, 4, then we go to an A7 chord which is just your first finger buying three strings here by five but we quickly hammer into the 6th fret on the third string that’s done another cool move so you strum that chord once then play too low a note and then put your third finger down and borrow across three strings again seven, seven, seven, and get this shape D over A

See how that connects there and we’re tied and then after that 1 and 2 and 3 and 4 and play a quick low A and 4 and then you repeat the riff again. So that riff would be able to count 1, 2, 3, 4 times and then after that fourth time you’re going to go on a C bar chords, you can do a power chord or a barre chord and then lift up your first finger and play open A with like a C over A an actual a cord it’s going to be such cool riff on all these lessons for a CD’s these back in black again if you’re having trouble click the links of the tab but from this point on what we’re going to do is we’re going to alternate.

What’s going on there you’ve got that classic sort of bluesy intro down let’s jump into the verse we’re going to do some palm muting play some little D-Y-A-D-S here we go nice coming out of that intro figure we lead into the verse and we switch over to this part and the verse kind of builds in two stages it does that 1st riff and then it kind of takes up the energy a little bit which is a device you’ll see in a lot of the songs on this album kind of like halfway through the verse it gets a little lift which is pretty cool it builds the energy so I’m playing two notes here I’ve got the 5th string open and then I’ve got the 4h string at the 5th fret and I’m using my third finger on that note now one thing that I’m doing with the right hand is on palm muting and I’m also kind of keeping this 8th note rhythm going like one and two and three and four and all on down strokes and then I’m going to move this melody note and sometimes I’m just going to be playing the open A, so I’ll break down the first measure for you it goes like this so what I’m doing is I’m playing two strums on 0-5 then I get back to zero for my second finger and then back up the sizes and then three and four and just playing too low a so that’s the first measure and then the second measure goes one so what I did there was play this melody five seven with keeping the a in there and the last two beats are the two strings then just the 5th string then the two string and the base notes are changing underneath like I was saying kind of kick it up a the you know the main harmony so it’s cool to that sort of ostinato keeps going now notch now we add these chords in there the second time around in the verse so it’d be like one and a chord so you’re going to combine these shapes with the existing riff we just play and then we’re into the chorus so basically what I did was 1 and 2 and 3  and then I play with an A chord with one finger and continue the riff then do it again this time a G, back to the riff and continue the riff this time it’s D. So chords were A, G, D, and then two bars launching into the chorus sounds like this so what that is a D chord F chord one three and then take that out two frets to achieve and back to rhythm figure 1 so let me review the second half of this verse.

We’re into the figure one with the A7, next we kick into the guitar solo and the rhythm guitar behind that is basically just doing these power chords and it sounds like this so what’s happening there for the first eight bars or so we’re playing an E power chord and the rhythms kind of 1 and 2 and 3 and 4, then you do it again that’s what I would do as a rhythm part underneath the solo.

I really hope this lesson inspires you makes you want to keep practicing and playing guitar for more information you can click on the annotation on your screen with that I card if you’re on mobile you can check out some of the courses available through guitar control.com. Make sure to subscribe on our You Tube Channel and we’ll see you in our next video lessons, thanks for watching.

Learn How to Play an 8 Bar Blues Chord Progression