I remember the first time I opened a guitar tab book. This was years ago, long before the Internet. Guitar tablature books were expensive. Every time I bought one, I milked it for all I could get. I’d learn guitar tabs from the time I woke up until the time I went to bed. When the Internet came around and guitar websites started popping up that offered guitar tablature to almost any song you could ever want, I was in guitar heaven. I went crazy. I would learn guitar tabs for songs I’d long forgotten about. The number of songs I learned to play grew every day, and it wasn’t long before I was the life of the party. I could play just about anything anybody wanted to hear.

There are a lot of advantages to learning guitar tabs. There’s the obvious benefit of learning to play so many of your favorite songs, but there’s also the educational value of actually seeing how some of your favorite songs are built. There’s more, though. You can learn guitar tabs as a way to make scales and other guitar lessons more accessible. Below are examples of how guitar tab can be used to learn guitar theory. The first is a C major scale, the second is an E minor pentatonic. The examples both use standard and tab notation. If you ever want to learn to read standard notation, this is a good way to do it. Comparing the standard notation with the tablature allows you to see a visual representation of the notes on the musical staff and where they are on the neck of the guitar. This makes tablature a powerful learning tool when used in conjunction with standard notation.

When you learn guitar tabs, you can play any song that’s been written out in tablature. Guitar tab is simple o read. It’s a logical system of horizontal lines that represent the strings of the guitar, with numbers representing the fret numbers placed on the lines. For most guitar players this is the best way to notate and read guitar music. Check out the diagram below. It shows you everything you need to know to read guitar music written in tab. As you can see by examining the guitar tab chart, this is the best way to represent guitar music because notes are written the way you find them on guitar. Take the time to learn this method and you’ll open up a world of reading guitar music. 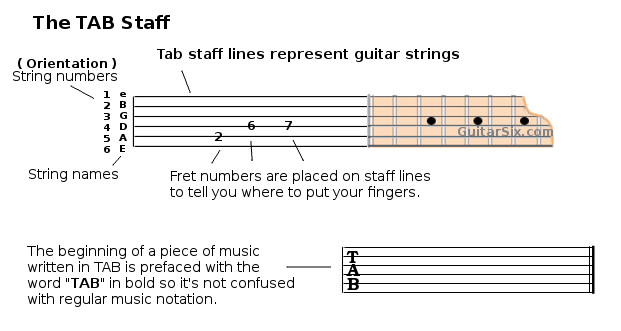