How To Play “Green Eyes” By Coldplay On Guitar

Hey, this is Claude Johnson with Guitar Control, I’m strumming some chords, Coldplay style and this is from a song called “Green Eyes”. 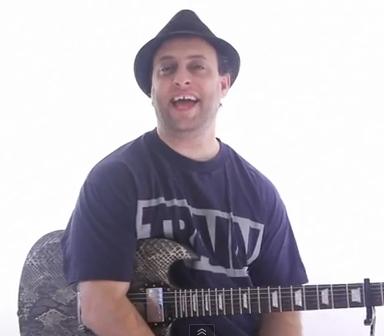 So we have G and then this D/ F sharp, that means F sharp in the base I went over slash chords on one of my other videos so check that out. So I get my thumb on the 2nd fret or in this case would be the 4th fret, and then I have A minor or A minor 7, another interesting thing about this song is they’re playing the guitar the song it’s not me it’s not the full chord we’re actually just getting like the four lowest strings in the G. The five lowest strings so that’s important because often the most important note at the chord is the highest note because that’s what’s called the melody note. So we had this and that the A minor 7 again we going up to the B-string, so usually when we talk about chords we’re talking about well we only play the highest five chords or only play the you know the highest five strings if you’re playing going to seek word or the highest five strings that you were playing a D chord here we’re talking about just the lowest strings little unusual so the lowest four strings and in the lowest five strings and then the lowest five strings so again it’s almost like a balance very cool song very cool vibes.

Let’s see, I go for lots of songs and chords and strum patterns and lots of good stuff if you’re interested in playing all your favorite songs which I know you are then go ahead and check out my Ultimate Beginner Guitar Course and keep in mind you do not have to be a beginner to really benefit from repertoire so just go to guitar control. com slash beginner and I hope you check it out alright that’s all I got for now stay rockin  and have an awesome day.

How to Play Norwegian Wood by The Beatles – Classic Guitar Lesson

How To Play Zeppelin’s Over The Hills And Far Away

How to Play Carry On My Wayward Son by Kansas

How To Play The Wind Cries Mary Guitar Solo

How To Play Best Friends by Amy Winehouse

How to Play Heart of Gold by Neil Young

How To Play Say It Ain’t So By Weezer

How To Play Crazy By Gnarls Barkley