In this Guitar Control video lesson instructor Jon McLennan, is going to show you how to play the “Eight Days A Week” guitar chords. This is a great song to get your strumming going, working on a little bit of a bass note strum pattern. We are going to take a closer look at this riff and really break it down in depth. And what better band to learn anything to do with chords and chord progressions than the Beatles. I remember in my music business class when another student asked if you can copyright a chord progression, and the teacher replied, if you could then The Beatles could sue everyone. 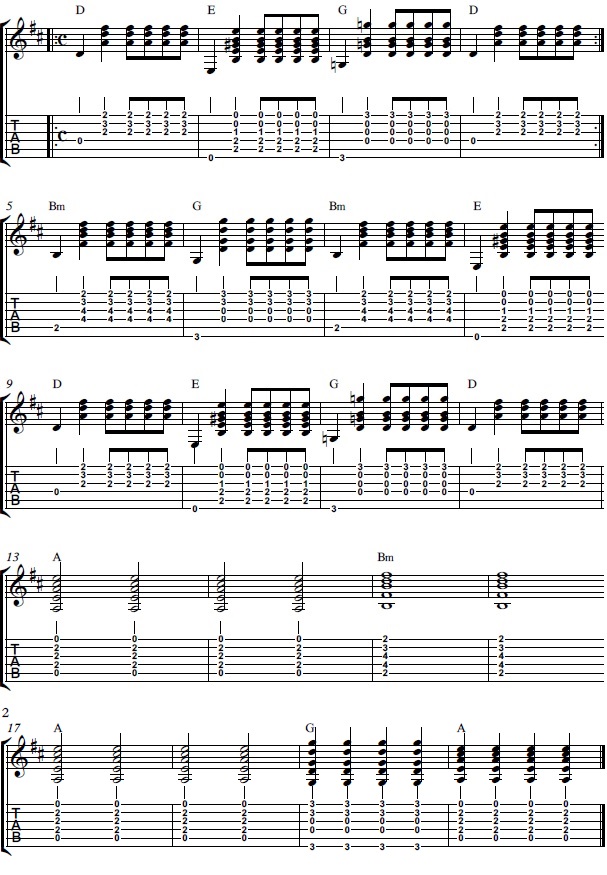 Step 1: The A Section

Whenever someone writes a capital letter for a chord name and nothing after it, that also means it is a major chord. So whether you write D or D major, they are both the same chord. Now back to the E. Place your middle finger on the 5th string on the 2nd fret, then place your ring finger right under it on the 4th string on the 2nd fret, and place your pointer finger down on the 3rd string 1st fret. Then strum all six strings down from the 6th string all through way through the 1st string, then to a G chord.

The way that Jon is holding down this chord is actually very interesting, it’s not the normal way to hold it down, it’s the same notes but the fingering is different. More of a folk style way to play it. The folk style way to play this chord has you placing your third finger down on the 6th string 3rd fret, your third finger is arched over and just barely touches the 5th string to mute it. In this way playing the G chord you actually do not want to hear that 5th string. Then place your pinky finger holds down the 3rd fret on the 1st string.

Strum this chord from the 6th string down all the way through the 1st string as well, again you won’t hear that 5th string because you are muting it. Still ok to strum it since it won’t ring out, it is indifferent. So for this G you only have two fingers on the fret board, your ring finger and pinky finger. Then after that G go back to D. The verse is basically just D, to E, to G, back to D, and then repeat. It starts and ends with a D so when you repeat the D will feel doubled. If you are enjoying learning this song, be sure to check out our other lesson how to play Dear Prudence for another The Beatles classic to add to your repertoire.

The way they are strumming this verse is pretty interesting. It’s really cool and really makes this song have a lot of life and character to it. First is picking the lowest string of the chord and then strumming down, down, up, down, up, for each chord. Same strum on all of them. So again with his strumming hand hitting the bass note and then strumming before he strums the whole thing. This almost gives the effect of having a bass player playing with a guitarist. Sounds a little bit more two dimensional than if you were to just strum regularly.

So holding down the 6th string 3rd fret with your middle finger and also using it to mute the 5th string, just like you did earlier, but now the chord uses both your ring and pinky fingers on the 2nd and 1st strings, both on the 3rd fret and same strum on this chord, too. So so far for this part we play B minor, to G, back to B minoar and then to an E major. The same E major we did earlier. Then go back to the original chord progression from section A.

The next section is the chorus where he signs, “Eight days a week…” Where you would just strum an A chord. To play an A chord hold down the 4th, 3rd, and 2nd strings all inside the 2nd fret and strum from the 5th string down. He does this for two measures but for each measure he strum does one strum and holds it out the whole measure A whole note rhythm. Then to B minor to E, and then a build in G to A. Then go back to the top of the song and that is all for today’s lesson.

Recap: How to Play Eight Days A Week by The Beatles On Guitar

I hope you enjoyed learning these “Eight Days A Week” guitar chords. This is such a beautiful song, it is simple yet there are a few really cool special qualities to it and things that make it a stand out song. For a song that is mostly just strumming open chords, that strum is so distinct and you know right away that it is this song. I think that would almost be harder to do with just chords. So remember don’t only learn the song, but learn from the artist. Think about what they do to make there song’s just a little different and how they stick out among the rest. Bring these elements into your own playing and let them help spark your creativity.