Hey, how’s it going this is Jon McLennan with Guitar Control, I’m going to teach you how to play on a song called “Tequila Sunrise” by the Eagles. What a great track and I’ll be using the old acoustic for this lesson. I’m going to break down the entire song and you’re going to be able to play through the whole thing we’re going to look at the strumming pattern and the various chord shapes that are used for each part. 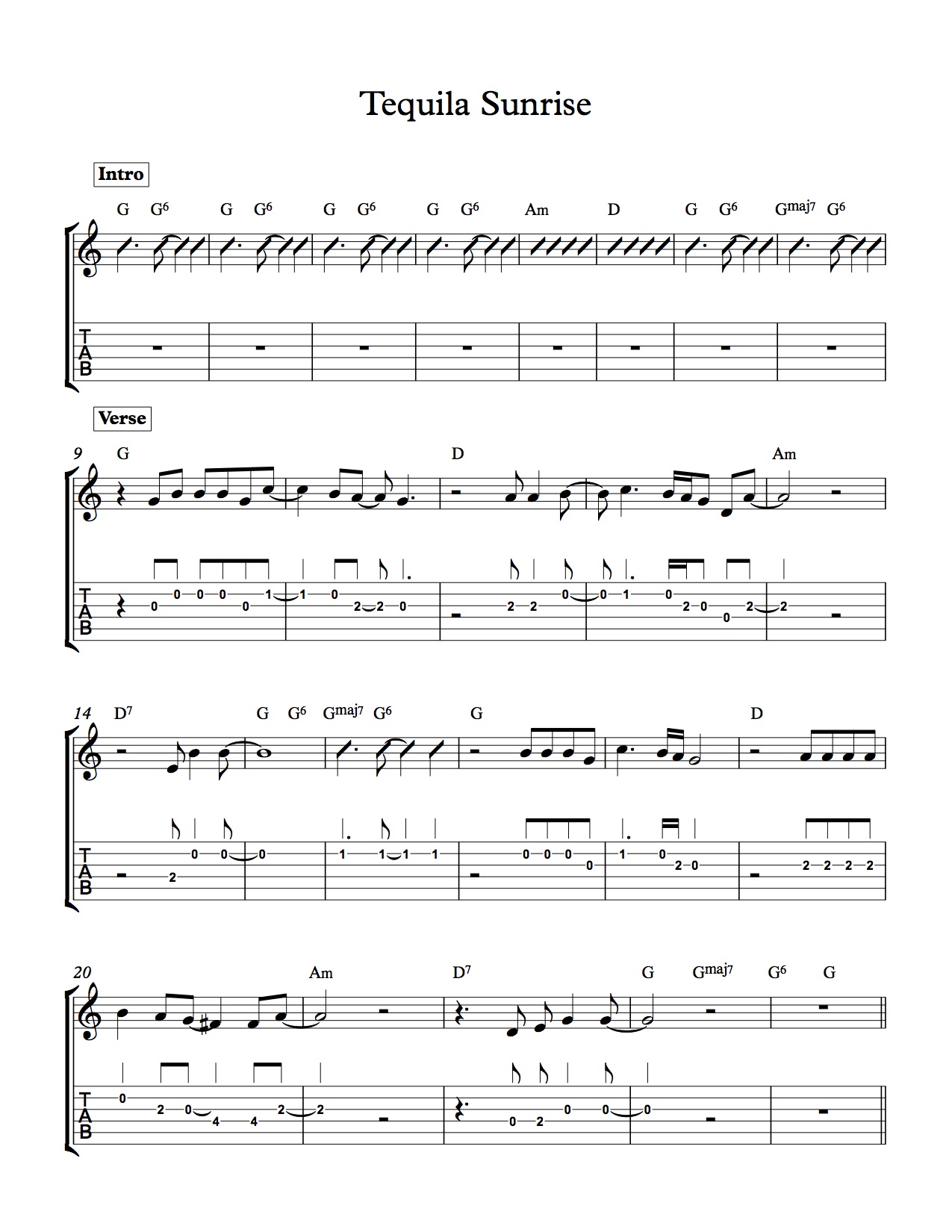 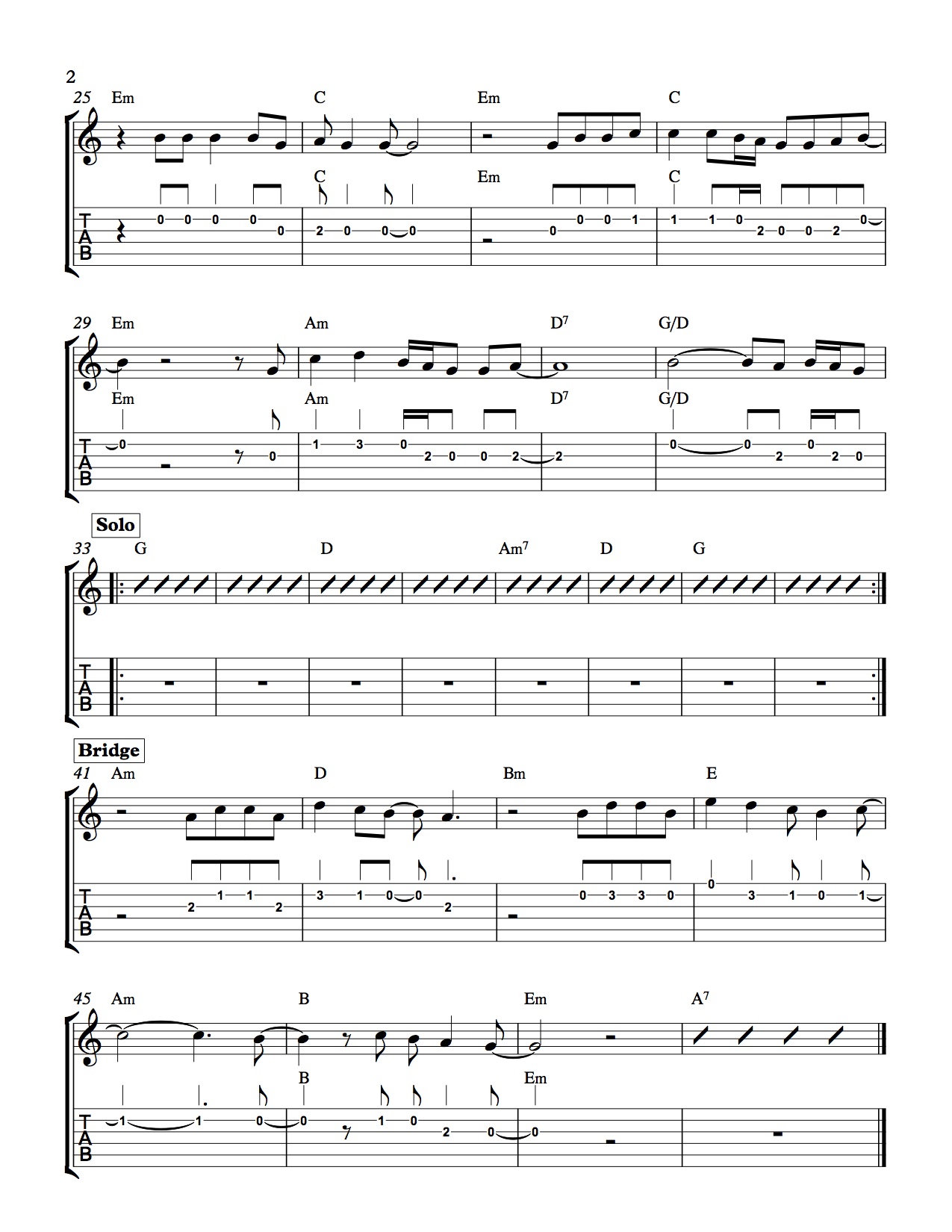 We’re going to kick start our strumming at the top the Intro it starts like this, so what I’m doing there in the 1st four bars is I’m alternating between a G chord and a G6, so the way that I play the G is actually just two fingers I put my second finger on the 3rd fret 6th string and then my third finger on the 1st string 3rd fret and then it kind of arcs over and I mute the 5th string so it sounds like this, then I add my first finger to the 4th string 2nd fret and that gives me a G6 chord so I’ve got some times you’ll hear I’m kind of hammer-on just hammers down but the basic idea would be playing G on the one and then the G6 on two just try that and then after that I go to an A minor and then a D chord so one measure on the A minor one, two, and then I’m back to the G to the G6 thing.

Now in the last measure before the version you here and it’s basically all on a C cord but I have a moving melodic line within the cord which is a really cool sound so I’ve got the G6 with my first finger down then that 6th note gets replaced by the major 7 of the of the chord so it’s an F sharp on a G. Now I’m playing three muted 5th string 4th fret open third fret it’s actually a really cool chord so again moving line so let me play again from top to bottom for you this is going to be 1, 2, 3, 4, 5, 6, 7, 8.

Now for the second half of the verse it does the reverse of that line so in other words before we were going GG6, G major 7, G6 we’re actually going to do now is go G, G major 7, G, G6 so then we’re into E minor so just to recap the verse section we’ve got a G, D, A minor, D, D7, then we do the walk GG6, G major 7, 6G then we do the same thing again we’re going to G, D, A minor, D7 then we do the reverse of the walk G, G major 7, G, 6G. Let’s try it first so as far as the strumming goes for this there’s a real simple pattern that you can do that will work through the whole song and that’s like this absolutely common strumming pattern I you know it’s you could use it in a song like “Brown-eyed Girl” by Van Morrison or just tons of Beatles song so you can strum away with this on and it really it’s one and two and three and four which would be down, down, up, up, down, up, down, down, up, down, so really you could stick with that now at the beginning there are these little kind of like turbo strums it’s not really a technical or turn for it but that’s what it sounds like the Mesa and really what I’m doing it’s going down, up, down, really fast in there so you’ll kind of hear those mixed in.

The simplest way would be the first way that I showed you and then if you wants to mix in some of those faster strums that’ll work. Let’s go to the next section starting on an E minor so again we’ve come where we end our previous section, was on that walk we’re going G major 7, G6 to G. I’m going to play that real quick, now we’re at the E minor and we’re back to a G so really I’ve got just a couple chords here A minor and then C then goes again D minor C then you go E minor, A minor, D7 and I like this G over D you could also use a DC in place of a D7 suspended, again E minor, C, E minor, C, D minor, A minor, D7, G / D. If you want I’d probably recommend that one which is going to be this little triad on the 3rd fret, 3rd fret, 3rd fret, 4th fret open D in the bass and then we’re back to the verse the 1st section.

At this point in the song we’re going to play one more verse and then we’re going to go into that guitar solo which is really just the verse again so let me play the changes for you for the guitar solo. And it probably won’t do any of those walls here just keep it straight then we’re into the last part of the tune which is really the bridge. Here I’m just zooming up on my chart, so let me play that section for you.

What I did there was I had an A minor, D, B minor as a barre chord here on the 2nd fret 2, 4, 4, 3, 2, then E. Before were playing an E minor but now we’re playing E major and this is kind of cool because like in the bridge one second the chords minor and then the next second it’s major and you’ve got these real interesting twists so 2nd four bars of the bridge is an E minor this time B major another example of what I was talking about we were playing a B minor I like about two bars before now we’re on a B major which is 2, 4, 4, 4, then E minor and then A7 should be open 2nd fret open 2nd fret, so one more time the whole bridge and you go right out of this back to back to the 1st again we get us walk ends on the G6 chords which would be again G with the added second finger really cool ending quartile play for you here’s what it sounds.

I really hope this lesson helps you doubt and inspires you makes you want to keep learning more and practicing guitar be sure to visit some of the links here you’re going to see some links on the screen so you can subscribe of course the guitar controls. Make sure to subscribe on our You Tube Channel and we’ll see you in our next video lessons, thanks for watching.