How To Play Alternate And Sweep Picking Combined On Guitar

Here´s a cool concept that I´d like to share with you!…
I called it intelligent Picking and it´s a mix of alternate and sweep picking! 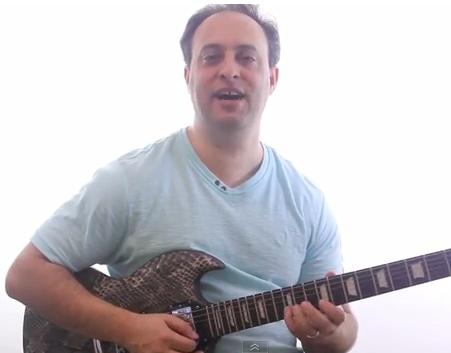 I also teach some of these concepts in my latest DVD `Supercharged Soloing Made simple´…
If you didn´t order it yet here´s the link, GO!

Basically I’m descending down the scale five notes at a time.
Now this pattern actually came out of a similar pentatonic
pattern. I was playing something like this. So the pentatonic
version of this actually is an example from my new course,
SuperCharged Soloing Made Simple. And I want to invite you
guys to check that out. Go to guitarcontrol.com/supercharged.
It’s really like a new approach to lead guitar playing so I
think you’re going to love it. Check it out at
guitarcontrol.com/supercharged.

Anyway, I like the idea of five-note patterns because they’re
kind of asymmetrical and kind of challenge your fingers in new
and different ways. So I started playing a five-note sequence
just using alternate picking and it really wasn’t very efficient.
So then I thought, why not use this kind of same picking strategy
with a diatonic scale. So let’s just start off with the pentatonics
because it’s more basic.

If you’re not familiar with these terms, economy picking refers
to economy of motion. So if I was playing something like…arpeggio,
if you look at my picking hand it’s just going straight down.
Not wasting any motions, not going up and down. It’s just straight
to the next string.

Now, the opposite of that is alternate picking where I’m always
alternating between a downstroke and an upstroke. A typical shred
pattern would be like this: down-up, down and then up. Now, notice
when I go up I’m going past the string and then hitting it on the
way back.

The economy picking school of thought would say that’s inefficient.
You’re wasting the motion. But in practice it doesn’t always turn
out that the shortest distance is the easiest thing for your fingers
because then you have to switch direction. So it’s often easier to
go past the string and then since you’re going to have to switch
directions anyway, you’ll hit it on the way back. And that’s why
you can play fast and play these patterns.

With this pattern you’re using both. When it makes sense using
alternate picking to start and then you do a little sweep just
to get to the next string. I’m calling this intelligent picking.
You can figure out for each lick or phrase the best way to pick
it using a combination of trial and error and your own intuition.
How your friend might pick it might be a little different than
how you are going to pick it. But you want to find the most
natural way to pick something.

So with this diatonic pattern it’s the same thing. It’s down,
up, down, up, down. Just going down five notes and then sweep
with another downstroke. Notice when I get to here I have to
do a little slide. The left hand is another topic. We could
talk about that in another lesson.

I want you to get this concept of intelligent picking using
a combination of alternate picking and economy picking. So
pick any lick, phrase, whatever and just play around with
different ways to pick things and I think it’s a very powerful
concept that should enrich your playing.

That’s all for today. Have an awesome day, awesome weekend
and don’t forget to subscribe to the YouTube channel, check
out our blog, click the link for the tabs. It’s all good.
Once again, check out my new course at guitarcontrol.com/supercharged.
I’m out of here. Catch you next time.