Today he will teach you a cool bebop lick! 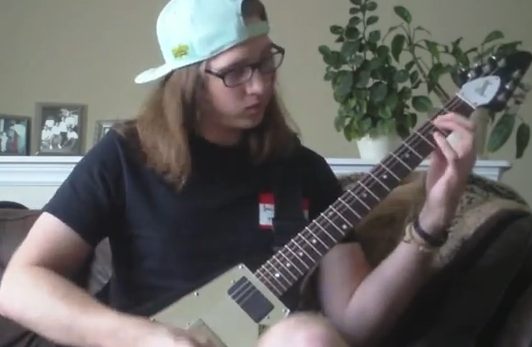 Hello. This is Cameron Rasmussen for guitarcontrol.com.

Hello, guys. Today I’d like to talk about bebop again.
In previous videos we’ve used only one chord at a time
to build a line for our bee bop-sounding lines. The
reason we did that is because it’s an easier approach
to build-up your bee bop line technique.

Today we’re going to be using an actual chord progression,
something you’d actually encounter in a bee bop sense and
we’re going to build a line going around the moving chord
tones and using chromatic approaches that way to get the
sound of all of the chords as opposed to just one.

With the one-chord approach you’re just thinking of the one
chord, static, and just sitting there and not moving. That
makes it easy because you only have to think of those chord
tones and then all you do is add chromatic approaches around
the chord tones that aren’t moving. But in this case it’s
a little bit harder.

So we’re going to be using a II-V in the key of C and we’re
going to be adding chromatic approaches and accenting the
chord tones in all of the different chords to get all of their
different sounds. And that’s going to sound like this. Here’s
the lick. Here it is again. Here it is a little bit slower.
Here it is slow one more time.

So, guys, in the line I just showed you, each chord gets
four beats. Now, you can hear the chord change every four
beats because I’m landing and accenting a chord tone on
that new chord. So any chord that I start with, I’m outlining
that chord with arpeggios, then adding chromatic approaches
around that chord and then chromatic approaches that lead
to the next chord. And that’s essentially all bee bop is.

You’re going through lots of fast chord changes at an
extremely fast tempo and you’re always outlining the
chords and chromatic approaches to the next chord after
it and then just keeps going. That’s essentially
what bee bop is.

So please click the link in the video description if
you’d like to see the tab for what I showed you today
and I’ll see you next time.