Guitar tab music has been around longer than you might think. Early examples of tab date back to the classical period of music. Popular modern use has been around for decades, resulting in an explosion of guitar tab music in book and online at hundreds of websites that specialize in delivering note for note guitar transcriptions of songs in every genre to the guitarist who eat it up.

What exactly is guitar tab music? Guitar tab is a type of music notation that uses a visual representation of the guitar’s six strings to indicate notes rather than the traditional music staff. An example of guitar tab appears below and illustrates the basics of reading it. The six horizontal lines represent the strings of the guitar, with the thinnest (highest) string at the top when you look straight at the tab. Additional notation on tab music might include technique indications such as a curved line with an arrow to show note bending or a diagonal line leading to or from a note to show a slide. 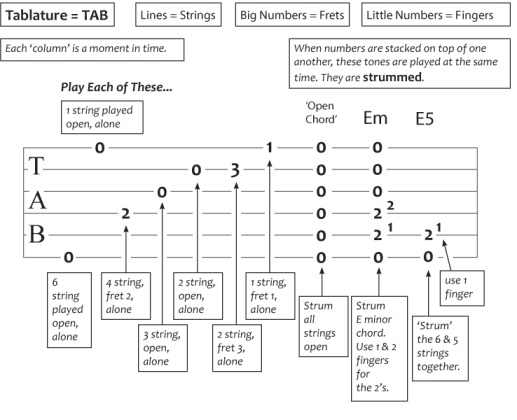 Some guitar tab music is a hybrid of tab and standard notation. A hybrid will be primarily tab but will include the note tails used in traditional music. Without the inclusion of those note tails, tab tells you what to play and where to play it on the guitar, but it doesn’t indicate how long a note should be held. The addition of standard note tails supplies this information to the tab.

Most guitar players who read guitar tab music have usually heard the song they want to play, therefore they aren’t to concerned with the addition of the note tails.

Other markings you are likely to find on guitar tab music include picking references, shown in the example below, and indications for tempo and dynamics. These last two are rarely seen in most guitar tab music, however, because most guitar players will rely on their ear and “feel” to add these elements to the music.

Guitar tablature is ideal for guitar players. In a way, it makes more sense than traditional music because it visually represents notes that can be played in more than one location, leaving no room for error. This is why most guitar players, and in fact, banjo and mandolin players, prefer this method of notating music for their instrument.