Here´s another short sample from `The Ultimate Acoustic Blues´,
the upcoming guitar course from Jimmy Dillon.

Minor Acoustic Blues Guitar Lesson
Well, all right. Here we go. This is a little A minor
jam that I came up with.

Now, what I like about this particular thing is we haven’t
really addressed anything in A or anything in a straight-up
minor. We did a little drop-D stuff. The blues can be a very,
very dark thing. It can be a minor; quite often it is. Sometimes
it can be a major, you know, a happy, kind of up, yeah, I just
got paid. I’m going out on a Saturday night, kind of blues.
And then you’ve got your forlorn, sort of my baby done me
wrong kind of blues.

In this case, this is something a little bit different. I hope
this is something fresh for you. I like to use, incorporate
open strings, as you know, because I love the sound of that.
It’s sort of — it’s almost like dangling kind of sound that —
where the notes just sort of ring-out and cascade. And even
though I’m moving my chords I have something else in common
that just stay there. The A root is obviously there. Almost
like a… We’ve got into that sort of thing before.

I go to a D minor. There are several ways you can do that.
Or this first position. I kind of like this one up here. Second
position D minor, because the sound of that against where
you are, a lot of open strings there. Then you kind of close
it down to… A little chop on it. Then you get back
to your open.

Then I go to an F. Sometimes I’ll do a major 7th. It kind of
has a nice ring-out to it. So you’ve got your high E on the —
creating an F major 7th for your V. And then I’ll usually go
to a E7th here. There are lots of voicings you can — if you
want to make it bluesier.

And again, there’s that silence — silence is golden kind
of thing, where we really like that drama that happens when
you close it down and let it set up and then go in. That’s
what I call a setup. When you’re doing a song like this that
as a lot of mood to it.

Right there I’m using a harmonic to kind of mark that A minor.
I do it in such a way where I rake my fingers. That’s another
technique that I think in the blues is really effective. Now
you’ve heard it done probably a lot of different ways. One of
the ways this gets done, also, and I’m going to stay in A minor
for this, was when you kind of do what I call a chew stroke,
and we’ve touched on this a little bit on a couple of my
acoustic things. That’s more of a shuffle.

So that’s a technique you can utilize in a song like this
where you’ve got your open A string and you want to get
a little bit aggressive with it. And then again. I’m
going to take that apart for you because that might
be a little deceiving.

What I’m doing is I’m coming down and I’m raking across
the strings like this. Once again, it’s that flamenco
stroke. It’s almost like the flamenco incorporated into
the acoustic blues, which I like. I use that percussive
nature of the fingers against the strings a lot. 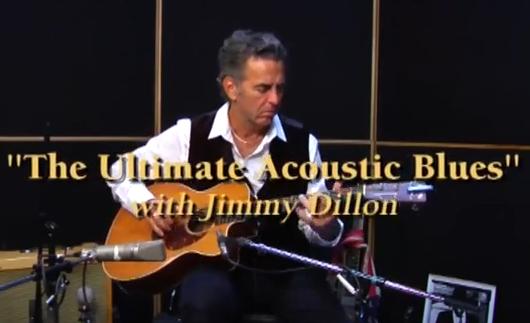